Breaking News
Home / Books / No lessons learnt from the past, ‘Military History of India’ makes clear

No lessons learnt from the past, ‘Military History of India’ makes clear 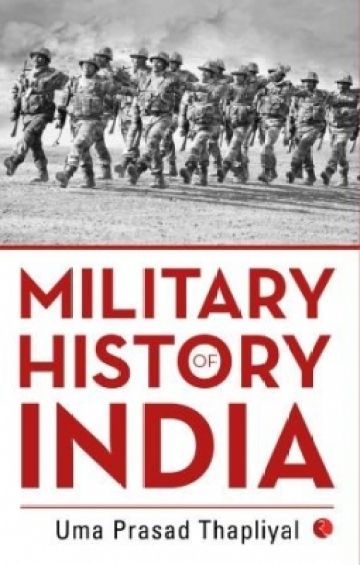 New Delhi : Sometime in 2001-02, a Group of Ministers headed by L.K. Advani, the then Deputy Prime Minister, had accepted a recommendation of a task force headed by Arun Singh, a former Minister of State for Defence, to create the post of a Chief of Defence Staff (CDS) to ensure that the three wings of the armed forces operated on the same page, particularly in times of conflict.

The Task Force had made the recommendation, among many others, after studying the report of a committee headed by K. Subrahmaniam, one of India’s most respected security analysts, on the bloody conflict in Kargil in 1999 when the Indian Army lost upwards of 700 personnel in evicting the Pakistani intruders who had surreptitiously occupied the icy heights.

“In future operations, whether defensive or offensive,” writes Uma Prasad Thapliyal, who has served in various senior civilian positions in the Defence Ministry, in “Military History of India” (Rupa/pp 516/Rs 995), “the participation of all three services would be required”.

“This would necessitate an integrated approach in planning and execution of operations and could perhaps be done most effectively under a Chief of Defence Staff, heading an integrated defence headquarters and unchained by the pulls and pressures of any particular service. This integration could also be applied at the command level.”

Much on these lines had been written on the issue, but 16 years on, there’s been no movement forward, on the rather specious plea of a lack of “political consensus” on creating a CDS as a single point reference for the government on all matters military.

Well, not exactly “no movement forward”.

“The present military set-up provides for an integrated defence headquarters. Headed as it by an officer of the rank of Lieutenant General or its equivalent, it hardly wields any authority. The chiefs heading the three services and their deputies holding the same rank (as that of the Chief of Integrated Defence Staff) are generally disinclined to listen to him and, at best, he functions as a recommending authority,” writes Unniyal, who retired as the Director of the Defence Ministry’s History Division.

Noting that a “sincere effort” at integrating the service would “indeed result in considerable savings” by reducing manpower and administrative expenditure, Unniyal said: “Furthermore, applying the latest management techniques and removing ‘flab’ from the Defence Headquarters could lead to additional savings.”

“Instead, the services have been expanding, creating section after section, possibly to open promotion opportunities or to find some relaxing chairs for officers. In fact, many officers who should be busy fine-tuning operation plans and sweating it out with the troops in the field, are whiling away their time at Defence Headquarters,” the book says.

Then, in 2012, a full decade after the GoM’s recommendation, a committee on defence reforms headed by Naresh Chandra, a retired bureaucrat who held senior positions in the Defence Ministry and the Prime Minister’s Office, muddied the waters further. It recommended the appointment of a permanent Chairman of the Chiefs of Staff Committee in a four-star star rank instead of a five-star.

This was possibly meant as a sop to the three service chiefs, who are four-star officers as it was perhaps felt they would more likely accept reporting to a four-star officer than a five-star officer. The Chiefs of Staff Committee is currently held in rotation by the senior-most among the three. This means that each of them gets a chance to hold the office, more of an old-boy’s club, before retiring.

As for the modernisation aspect, the book says that despite the changing ethos of war, “conventional forces are likely to play a decisive role in future also… In fact, to meet the future challenges of war, various arms of the Army would need to be reformed”.

The ground reality is far from this — as has been for the past two decades — if not more.

Armour, the king of the battlefield, “would need better protection against mines, armed helicopters and anti-tank weapons” and the tanks “would have to be made lighter, faster, lethal and better protected”.

The book concludes that the pace of modernisation was “tardy” and attributed this to “budgetary constraints, delays in procurement, corruption in purchases, indecisiveness of the leadership”, as also the “poor showing” of the Defence Research and Development Organisation (DRDO) and, “occasionally, non-availability of suitable technology”.

“These impediments would have to be overcome if India wants to build a first-rate army to counter any threat to its security,” the book says.

At the bottom line, nothing seems have been learnt in the 70-plus years since Independence.

Remember the tagline from the hugely successful “Tamas” tele-serial of the late 1980s: “Those who forget their history are condemned to repeat it.”

Slightly paraphrased, this could well apply to the armed forces.

(Vishnu Makhijani can be contacted at vishnu.makhijani@ians.in)