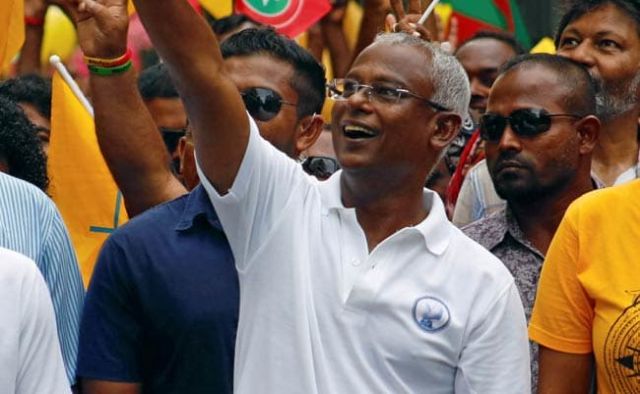 The Election Commission earlier in the day declared Solih the winner with 134,616 or 58.3 per cent of the votes, compared to 96,132 votes or 41.5 per cent secured by Yameen, backed by the Progressive Party of Maldives, reports Efe news.

Solih will be sworn in on November 17 and his term is expected to continue until 2023.

“I know that I have to step down now,” Yameen, who has been accused of crushing dissent in the archipelago, said in a short speech from the presidential office.

Yameen, whose rule was marred by accusations of despotism, said he accepted the decision made by the people, and urged them “to remain calm and ensure the smooth transition of power”.

In his victory speech, Solih said: “The message is loud and clear. The people of Maldives want change, peace and justice.”

India, which is concerned with the political instability in the Maldives, also welcomed the result.

“We welcome the successful completion of the third presidential election process in the Maldives which, according to preliminary information, Ibrahim Mohamed Solih has won,” the External Affairs Ministry said in a statement on Monday.

The island country, home to around 22,000 Indians, is of strategic importance to New Delhi also due to its growing proximity with China.

Exiled former President Mohamed Nasheed said on Twitter that Solih had done “an extremely good service” to the people of Maldives.

These were the third democratic elections in the country, after the adoption of the Constitution in 2008, which paved the road for the establishment of a multi-party democracy in the archipelago.

Sunday’s elections saw a high turnout of 89.22 per cent of the 263,000 eligible voters, the Commission said.

The European Union and US had earlier voiced concerns about the election, with both threatening to impose targeted sanctions if the democratic situation did not improve.

The upheaval in the archipelago worsened after the Supreme Court in February quashed the convictions of nine opposition figures, among them Nasheed, who was ousted from office in 2012.

But after Yameen declared a state of emergency and ordered the arrest of two judges, the court reversed its decision.

By Syed Ali Mujtaba I am awestruck seeing the obituary coverage of Sadia Dehalvi, a …