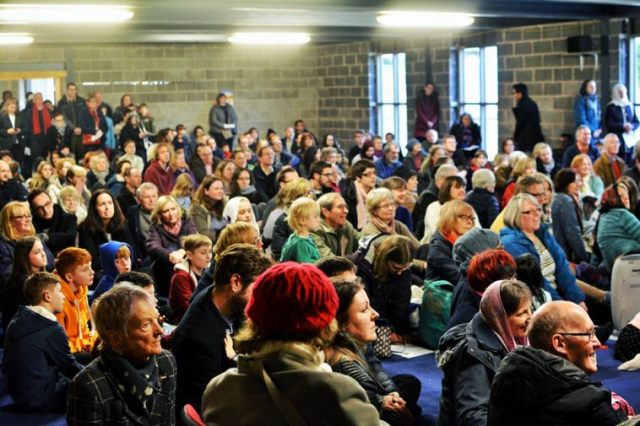 LONDON : Mosques across the U.K. have opened their doors to the public on Sunday as part of an annual national event that aims to build closer relations between the British Muslim and non-Muslim communities.

Over 250 mosques participated in ‘Visit My Mosque’ event which saw people being welcomed into their local mosques and partake in activities aiming to broaden their knowledge on Islam, Muslims and the purposes of mosques.

“Despite those who continue to fund hatred and sow division in our society, Muslims across the U.K. have shown today that regardless we will continue to do the opposite by building bridges and bring communities together” said Harun Khan, secretary general of the Muslim Council of Britain.

“Thank you to everyone who took part today” he added.

This year’s ‘Visit My Mosque’ event was held amid a stark rise in Islamophobia and anti-Muslim hate crimes with the right-wing extremists attacking the mosques and Muslim communities across the U.K. Community and faith leaders have hailed this year’s initiative as a success and an example of tolerance and acceptance between Britain’s Muslim and non-Muslim communities.

Kingston Muslim Association in south-west London is one of the mosques that opened its doors to its local community and held a variety of activities including a mosque tour and an exhibition of Islamic art and religious texts.

“I attend the open day every year and every year I learn something new” said Jeremy, a local resident and community worker who actively engages with the Muslim community. “And every year I see more and more people visit the mosque and engage with the [Muslim] community and as a proponent of multiculturalism this makes me incredibly happy” he added.

“This sends a message to the Islamophobes and those who are against unity that Britain will remain an open and an inclusive society that not only welcomes peoples of different faiths but actively engages with them so that they may know about one another” Jeremy said.

Celebrating the fifth anniversary of the initiative, British mosques also promoted the ‘Great British Spring Clean’, a campaign that aims to improve the environment and help communities across U.K. keep clean and environmentally friendly.

Besides the publis, MPs also took the opportunity to visit their Muslim constituents and voice their support for the Britain’s large and influential Muslim community.

“Every year Muslim communities across the country open their doors to people of all faiths and none on #VisitMyMosque Day,” said Jeremy Corbyn, leader of the opposition Labour Party. “It’s a fantastic opportunity to build understanding across communities and educate ourselves about our diverse communities. Let’s build bridges not walls” he added.

Earlier this week, Muslim faith leaders from across the U.K. visited churches, synagogues, Hindu and Sikh temples as a gesture of solidarity and to convey a message that regardless of their faith, communities should remain united.

The Muslim Council of Britain is the U.K.’s largest Muslim umbrella organisation, representing more than 500 institutions and mosques and holds annual events such as Visit My Mosque Day that aim to unite communities across the U.K.

In the last three years, there has been a sharp rise in Islamophobia and anti-Muslim hate crime in the U.K. with 2017 having a record number of attacks against Muslims. In 2018 there were over 1,200 reports of Islamophobic attacks, a 26 percent surge from the previous year.

Islamophobic incidents have risen significantly due to a number of factors such as Brexit and the proliferation of far-right groups manipulating misconceptions on immigration and faith.AA