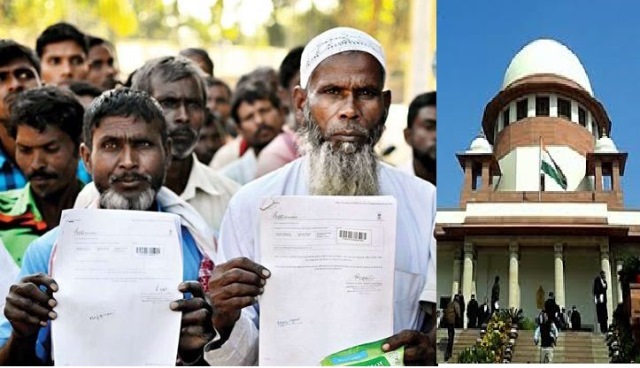 New Delhi: A group of around 50 prominent academics and activists on Tuesday submitted a petition to the Supreme Court seeking its intervention in the ongoing process of National Register for Citizenship (NRC) update in Assam. The group pleaded to the court to direct the authorities to recheck of papers of 4 million NRC dropouts before Standard Operating Procedure (SOP) is initiated.

The appeal, signed by such as Prof V.K. Tripathi, Prof Irfan Habib, former vice chancellor of Lucknow university  Prof Roop Rekha Verma and former MP Mohammad Adeeb and others,  was submitted to Justice Ranjan Gogoi’s court  who is heading the Bench which has been monitoring Assam NRC matter.

Talking to Muslim Mirror, Prof V.K. Tripathi said more than 50 eminent persons have signed on the petition that seeks the apex court’s intervention in the NRC matter as most of those left out in the final draft of the NRC are poor and members of working classes.

Prof Tripathi, who is the convener of Sadbhav Mission, said he had recently visited Assam and found that the drop outs were from all the “communities – 40-50% Muslims, 40-50% Bengali Hindus, 5-10% others”.

The ongoing exercise of NRC has busted the myth propagated over the last forty years of “massive Bangladeshi infiltration” as 88 percent people have made it to the NRC draft in the two rounds, he said.

This has been reinforced by the rhetoric by the highest leaders of the ruling party at the Center as well as in Assam, he said.

With such prevalent prejudice, NRC has been a tough exercise and in view of this, we have made a number of suggestions to the Justice Gogoi’s bench, Prof Tripathi said.

1)  Re-verification of 10% random cases from the NRC drafts is unwarranted as this would amount to suspecting a fraud and undoing the entire exercise. This will only give vent to vested interests to continue propagating the myth of massive infiltration for a long time. They may start calling for re-verification of rest of the 90% as well.

2)  Rechecking of papers of 4 million NRC dropouts must be done, before SOP is initiated, as there are many cases where genuine papers have been rejected.

3)  For the left out family members of those who have made it to the NRC, an affidavit from the in-NRC members be made sufficient for inclusion in the NRC, especially for women and children. There may kindly be no additional paper requirement.

4)  Panchayat certificates, issued to women, with the signatures of the Panchayat Secretary and BDO, must not be required to be further substantiated.

5)  NRC should reveal the details of the dropout cases, community-wise and gender-wise along with the reason of rejection so that the myth of detecting 4 million Bangladeshi infiltrators, currently being propagated widely across the country may be halted.

7)  A wage worker, even if an illegal alien, is earning his/ her livelihood through hard work, serving the citizens’ families or establishments or contractors, adding to the wealth of the nation more than he draws. Further, his/ her forefathers belonged to this soil for millennia. Hence anyone who has worked for ten years or so deserves to be a citizen of India, just like Indians going abroad get the citizenship of that country after 10-15 years. For this Central Government be asked to come out with new set of rules.

8)  One may not ignore the fact that Bengal was the highest textiles base in India before 1757, when East India Company took over reigns from Sirajuddaula. British rule crippled the textiles cottage industry, subjecting Bengal to acute poverty, famine and outward migration. Many workers and marginal farmers, after British took over Assam from Burma in 1826, moved to Assam to grow jute and rice on barren lands (marshes and chars of Brahmaputra).  They settled on barren lands or worked for landlords, hence earned the right to live there. A large number of NRC drop outs are working class descendents of these people.  There was no consideration of the interests and plight of the working classes in the partition of India in 1947.

9)  The partition was merely the division of ruling authority, few states came to be ruled by the Muslim League and remaining by the Congress. People could live where ever they wanted. Justice demands that any one among the working classes born in India and having ancient roots in Indian soil be treated as Indian citizen.

10) The pauperization of Assamese farmers is not due to the landless and marginalized laborers left out of NRC, but due to the market forces. The land may be in their name but the price of produce they get is controlled by the market forces and it is too low. As a result, farmers are struggling for survival and fleeing the villages. In last two decades sizeable people from Assam have migrated to Kerala as many locals from there moved over to Middle East.

11)  Land erosion by Brahmaputra since 1965 has taken away 3 lakh hectare of land, forcing lakhs of people to move. This has been one of the factors many NRC drop outs could not furnish adequate documents.