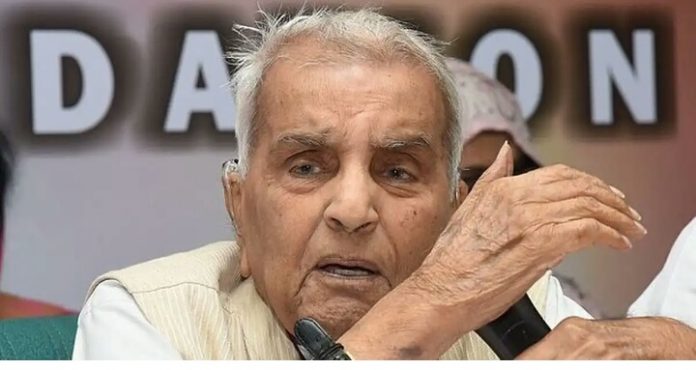 Today (20 April 2019) is the first death anniversary of Justice Rajindar Sachar – a socialist visionary, a Justice par excellence, a true secular and democrat, an unrelenting human rights and civil liberties champion and a wonderful person having complete faith in human goodness. While paying her tribute to him on his demise, Seema Mustafa rightly said, ‘Our finest has gone’. I personally feel a great sense of loss without him, particularly in my political activities. He was so very involved in the affairs of Socialist Party (India) which he and senior socialist leaders like Surendra Mohan, Bhai Vaidya, Pannalal Surana, Prof. Keshav Jadhav formed in 2011 along with several young socialists. He used to have this hope and belief that the old glory of the Socialist Party and the original spirit of the movement/ideology will thrive once again in the realm of Indian politics. Of course, in order to replace the present corporate capitalist order. I often wondered about his optimism and used to ask him that if people around him did not respond adequately to his  appeals, how could he hope that public in general would support his party and candidates? To that he only used to give an innocent smile, without a slightest sign of pessimism. His smile always kept us in a positive frame of mind and that is what we miss badly without him around us.

In the later period of his life, Justice Sachar was mainly known for the Sachar Committee Report. The Sachar Committee, headed by Justice Rajindar Sachar, was constituted in 2005 by the then Prime Minister of India Dr. Manmohan Singh with the aim to prepare a report about social, economic and educational status of the Muslim community in the country. The Committee’s 403 page report was presented in the Lok Sabha on 30 November 2006. The findings and recommendations of the report immediately became a topic of sharp debate in political, social and intellectual circles. The report was considered to be a mirror which showed the true picture of the Muslim community throughout India. Consequently, it received praise from a large part of intelligentsia as well as from political parties. Although there were some dissenting voices too about the findings, recommendations and methodology of the report, it was well received by most people. After the publication of the Report, many adverse reactions were made. An assassination plan was also reported. When this disclosure was published in the Indian Express, I wrote a letter to the Manmohan Singh government requesting it to provide protection to Justice Sachar. But the government did not pay heed to my request although the same government wanted to give him Padam Bhushan in lieu of the Report, which Justice Sachar humbly refused.

The report, known as ‘Sachar Committee Report, brought for the first time attention to the ever growing economic inequality and social insecurity and alienation of Muslims in India since Independence. It found, on basis of official data, that the Muslim population, estimated at over 138 million in 2001, were under-represented in the civil service, police, military and in politics. Muslims were more likely to be poor, illiterate, unhealthy and to have trouble with the law in comparison to the other Indians. Thus the myth of ‘Muslim appeasement’ was thoroughly exposed and the report became a focus of debate and controversy among scholars and political parties/leaders. Justice Sachar’s activities, including this Report, were guided by the perspective of socialist ideology and the socialist movement of India. First and foremost, he was a staunch Lohian socialist.

Then there started a race among various political parties to make promises in their manifestoes to implement the recommendations of the Sachar Committee Report. The only exception was BJP which, in fact, opposed the report vehemently. But the secular parties kept repeating their promises through manifestos and rhetoric. However, when one reviews the progress of the report carried out by the central and the state governments, particularly the implementation aspect of its recommendations, the picture appears to be quite dismal.

The Report states that the minorities, especially the Muslims, have been the ignored factor in all Central Governments. Amongst the various recommendations, the Prime Minister’s High Level Committee Report had recommended the establishment of Equal Opportunity Commission (EOC) as an instrument to prevent discrimination against minorities in the private sector like housing and employment. It was an important point since courts cannot interfere in cases of discrimination in private sector. This recommendation has been inexcusably sidelined and has remained in cold storage. The EOC can be set up by the state governments without taking permission from the Central government.  A very urgent recommendation of the Report dealt with the unfairness of divisions of electoral constituencies which results in lesser number of Muslims in the legislature to which they are broadly entitled, based on the population. This anomaly arises from the irrational demarcation of seats in the legislature.

In U.P. there is abundant potential for substantial number of Muslims to win seats. As per the Report, to address this, the delimitation of constituencies in a fair manner is essential. But on the contrary the constituencies with substantial number of Muslims have been reserved for S.C., and constituencies with substantial number of S.C. voters are unreserved. This is unfair to both Muslims and S.C. electorate.  The Committee had hoped that it would receive the attention of the Government immediately because the Delimitation Commission was at that time engaged in this exercise and evidently any suggestion or any exercise  to be done by it had to be undertaken during the current term of the then Delimitation Commission. But, the Committee’s suggestion was ignored during the delimitation.

But now, as far as the Muslim minority is concerned, politics has taken a different turn after the advent of Narendra Modi on the national scene. As a result to that no political party has mentioned the recommendations of the Sachar Committee in its manifesto during Lok Sabha elections 2019. Justice Sachar wanted to live on till this election. But unfortunately his health did not permit him to fulfill his desire. If he had been alive today,  he  would have felt very upset about this development.