Shahryar – the person and the poetry (Book Review) 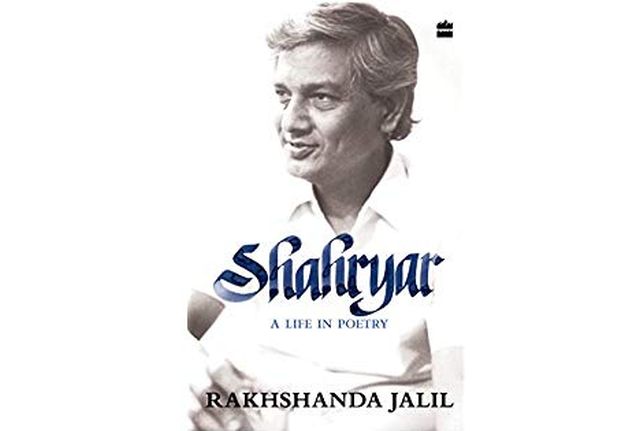 Shahryar (1936-2012) was arguably one of the best Urdu poets in the post-Independence era. Emerging as a poet in the 1960s, when progressiveness was drawing to a close and modernism was sweeping the literary scene, he carved a niche for himself even as he refrained from identifying with either of the two groups.

In this biography, writer, critic and literary historian Rakhshanda Jalil has brilliantly captured different aspects of Shahryar’s life, his works in the backdrop of “taraqqi pasand” (progressive) versus “jadeed parast” (modernist), his unique yet simple style of poetry and also his brief tryst with films.

Tracing Shahryar’s journey as a poet, the author demonstrates how he evolved a set of symbols, images and metaphors that, while seemingly personal, transcended the self and the individual to speak of universal concerns.

She believes that the brevity and succinctness in his description, and the softness and evenness in his tone, set apart Shahryar’s poetry from his contemporaries.

The author notes that unlike many Urdu poets, who used to coin new expressions with the use of hyphenated words, Shahryar’s short poems used to catch the reader’s attention with a simplicity that is startling and direct. For instance:

With her translation of Shahryar’s best ghazals and nazms in English, the author has introduced his poetry to a new generation while evaluating his considerable body of works.

According to her, the individualism and romanticism of Shahryar’s early years, as evident in his first collection of poetry, “Ism-e-Azam” (The Highest Name) published in 1965, soon gave way to an acutely felt concern for the world around him in subsequent collections such as “Satwan Dar”‘ (The Seventh Doorway, 1969) and “Hijr ke Mausam” (Seasons of Separation, 1978).

The author believes that while refusing to fully adopt the vocabulary of the revolutionary poets favoured by the progressives, he refused to write merely to satisfy his own creative self or ease the burden of his soul, thus differing sharply from “jadeed parast” as well.

The book also encompasses the early life of Kunwar Akhlaq Muhammad Khan, who later took “Shahryar” as his nom de plume. Under pressure to follow in the footsteps of his father and join the police department, this Rajput boy from western Uttar Pradesh left the family home in 1955 and lived with Khalilur Rahman Azmi, his friend and mentor who spotted his poetic talent and encouraged him to write.

Shahryar had begun writing poetry in the final year of his BA at Aligarh Muslim University.

The book also refers to the legendary rivalry between Shahryar and Rahi Masoom Raza. Both were contenders for the coveted post of lecturer at Aligarh University and it was Shahryar who bagged it while Raza moved to Mumbai where he earned name and fame in the film and television industry.

With his debut collection of poems “Ism-e-Azam”, Shahryar established himself in the world of Urdu poetry and a flattering review by Gopi Chand Narang gave him the sort of international recognition that few poets of his time could hope for.

The author observes that while Shahryar wrote only in Urdu, there was nothing in his oeuvre that makes an explicit call to any one community. “If ever there is a writer who can most effectively debunk the absurd misconception that Urdu is the language of Muslims or the cultural repository of Muslims alone, it is indeed Shahryar.”

In a literary career spanning five decades, Shahryar always managed to remain topical and his poetry could always be termed “the call of the time”. A self-confessed Marxist, Shahryar was, however, not an atheist.

The author believes that Shahryar’s film lyrics have caused him as much harm as the fame they brought his way. While his songs made him a household name and enabled his words reach all nooks and corners, it must also be acknowledged that in the popular imagination, he became etched as a lyricist and not a poet of gravitas and merit.

“That four films should cast such a long shadow over a poet who produced six highly regarded volumes of poetry and two different editions of critically acclaimed collected works is, to my mind, an injustice to a poet of Shahryar’s calibre,” the author concludes.

(Mohammed Shafeeq can be contacted at m.shafeeq@ians.in)