Breaking News
Home / Muslim Mirror / Shocking from ASI observers : There is no temple but older mosques under Babri Masjid

Shocking from ASI observers : There is no temple but older mosques under Babri Masjid

New Delhi : Two archaeologists, Supriya Varma and Jaya Menon, have accused the ASI of having preconceived notions  and violating ethical codes and procedures during the excavation by the Archeological Survey of India (ASI)in 2003.The six-month-long excavation by the Archeological Survey of India (ASI) had informed the Allahabad High Court that it found evidence of there being a temple under the Babri Masjid, the 16-century mosque demolished by Kar Sevaks on 6 December 1992.

Varma, professor of archeology at Jawaharlal Nehru University, and Menon, who heads the history department at Shiv Nadar University, told the court that the excavation did not find anything that supported ASI’s conclusion. In 2010, they published a paper in the Economic and Political Weekly, challenging the methods used in collecting evidence and its interpretation.

The Babri Masjid was a mosque in Ayodhya, India. Located in Faizabad district, it was one of the largest mosques in the Uttar Pradesh state. Before the 1940s, the masjid was officially known as Masjid-i-Janmasthan. According to the mosque’s inscriptions, it was built in 1528–29 (935 AH) by Mir Baqi, on orders of the Mughal emperor Babur . 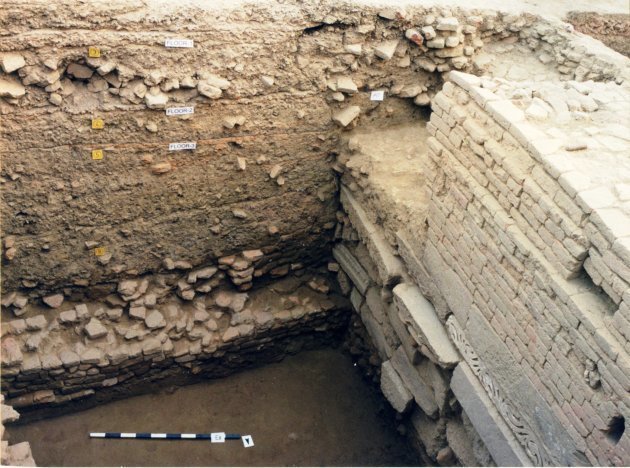 The mosque was located on a hill known as Ramkot . According to hearsay, Baqi destroyed a pre-existing temple of Rama at the site. Limited historical evidence exists to support this theory and the existence of the temple itself is a matter of controversy. A report by the Archaeological Survey of India suggested that a temple existed at the site. The political, historical and socio-religious debate over the history of the site and whether a previous temple was demolished or modified to create the mosque, is known as the Ayodhya dispute.

In August 2003, following a six-month-long excavation, the Archeological Survey of India (ASI) informed the Allahabad High Court that it had found evidence of there being a temple under the Babri Masjid, the 16-century mosque demolished by kar sevaks on 6 December 1992.

The archeologists, who were observers during the excavation on behalf of the Sunni Waqf Board, a party to the tile suit in the Ayodhya dispute, say the ASI, then under the Bharatiya Janata Party-led (BJP-led) National Democratic Alliance government, was under pressure to reinforce the Hindu right-wing narrative that Mughal emperor Babur’s general Mir Baqi knocked down a temple to build a mosque on the spot where Hindu god Ram was born.

Ahead of the 26th anniversary of the Babri Masjid’s demolition, Varma spoke to HuffPost India about the three key pieces of evidence found in 2003, why she thinks the ASI felt compelled to fabricate its conclusion, and procedural lapses during the excavation led by B.R. Mani, who was later replaced on an order by the Allahabad High Court. In 2016, the Modi government appointed Mani as the Director General of the National Museum.

What the ASI has excavated is not evidence there was a temple underneath the mosque. One is this western wall, the second are these 50 pillar bases and third are architectural fragments. The western wall is a feature of a mosque. It is a wall in front of which you say namaaz. It is not the feature of a temple. Temple has a very different plan. Underneath the Babri Masjid, there are actually older mosques.

Underneath the Babri Masjid, there are actually older mosques.

The third piece of evidence is these architectural fragments. They say there are some 400-500 fragments, which are pieces of architectural buildings. Of these, they say 12 are the most important. Of these 12, none of these were found during the excavation. These were recovered from the debris lying above the lime floor of the masjid. There is this one particular sculpture, which is closest to some kind of image, which they called a ‘divine couple.’ But even that is just one man and a woman and is half-broken. There is nothing else. A temple, a stone temple—supposedly this is a stone temple—has much more sculptured material than what they have found.

There is no archeological evidence that there was a temple under the Babri Masjid.

The stone cannot be dated. What you date in archeology is the deposit, the layer in which the particular artefact has been found. In that also, you can date organic material. So, for example, a bone or a shell or charcoal. The ASI have got some dates. But this sculptured piece has not even come from a stratified deposit.It could have come from anywhere. There is no way of dating it. In other words, there is no evidence for a temple.You can date those floor levels. They clearly belong, in my opinion, to the period from the 12th to the 15th century at different levels.

On the one hand, they are claiming a massive temple with more than 50 pillar bases, but they are also saying that there is a circular shrine under these pillar bases, which is much smaller in size, about three to four meters in diameter, which they claim belong to the 10 century. But I have examined walls next to the circular structure, and the information mentioned in the site notebook of that particular trench, which mentions these walls belong to the Gupta period. And that is why this circular structure would also belong to the Gupta period around 4th-6th century AD.