LONDON : Irish singer Sinead O’Connor has announced she has converted to Islam and said she has changed her name to Shuhada’ Davitt.

The 51-year-old has been posting selfies of herself wearing hijabs on Twitter in recent days, as well as a video in which she sang the Azan, or call to prayer. 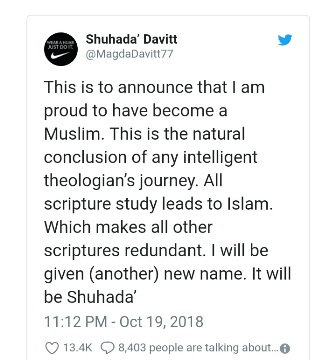 She tweeted on Oct. 19: “This is to announce that I am proud to have become a Muslim. This is the natural conclusion of any intelligent theologian’s journey. All scripture study leads to Islam. Which makes all other scriptures redundant.”

In an another tweet the singer says “I should have said the Q’raan CONFIRMS previous scriptures Except where it points out illegal alterations in those scriptures. Made by those who did not submit themselves as they ought have, to God. Who by the way never gets any royalties when people buy the Bible”.