Story behind the sealed mosque in Gurugram 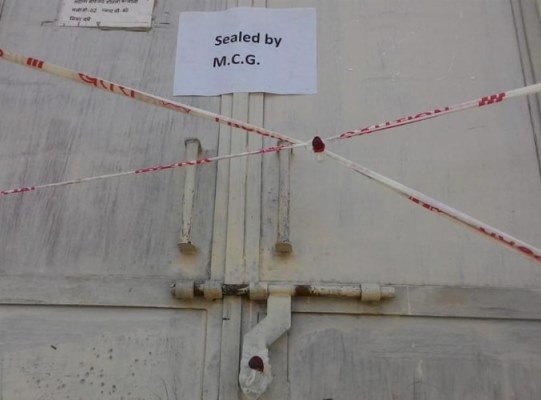 New Delhi : The sealed mosque in Gurgram was not reopened on Friday after the assurance of Divisional Commissioner (DC) D Suresh. People have protested near the mosque against the seal and now United Against Hate, a scholars’ organization, has announced to gherao Haryana Bhawan today at 2 pm for the same.

Municipal Corporation of Gurugram (MCG) sealed a multistory mosque, Express reported, in Sheetla Mata Colony on Wednesday. This worship place was sealed on the ground that it was located within 300 meter of the Indian Air Force (IAF) ammunition depot, where any new construction was prohibited as per an order by the High Court of Punjab and Haryana.

This place was among 11 buildings sealed on the same ground. But the concerns were raised over this move as this development came after  protests by Hindu outfits against the use of loudspeaker in the mosque. Rahul Roy, an independent filmmaker, wrote on his Facebook timeline, “All buildings are unauthorized. Trouble brews over a loud speaker at the Masjid. Hindutva groups object. The state steps in and seals the Masjid for being too close to the ammunition depot. The Mandir and the Church are now bereft of the azaan.”

Since Wednesday Muslims of the area  have been sitting in protest outside the mosque. Citizens’ organization namely Muslim Ekta Munch and Nagrik Ekta Munch has been involved in the protest. According to Hindustan Times, Dalit rights group Bhim Sena has also extended its support to them. United Against Hate, an organization of young scholars namely Umar Khalid and Mohit Pandey also claimed on its Facebook page to reach the site in their support.

On Friday, Express reported, the protestors were dispersed by police personnel and DC Suresh agreed to de seal the mosque by 4 pm. He said, “There is a provision in the law that if a structure is sealed, and people appeal against it, it can be de-sealed. The mosque will be de-sealed by this evening.” The protestors were hopeful that prayer of Maghrib will be organized in the mosque but their hope remained not to be true.

Nadeem Khan, a leading worker of United Against Hate posted on his Facebook, “Maghrib prayer was promised to be organized in the mosque, nothing happened. Gherao Haryana Bhawan, Delhi on 15 September at 2 pm.”