Breaking News
Home / Education / Story of the Prophet Musa (AS): A Story of Optimism

Story of the Prophet Musa (AS): A Story of Optimism

As we all know that messengers of Allah Almighty were sent to convey the message of Allah (SWT) to the people of this world. Prophet Musa (AS) was also sent to the people of Israel to make them worship of Allah Almighty and the Holy which was revealed to Him was Torah. In Holy Quran, Allah Almighty says: “Verily, We did send down the Torah to Moses therein was guidance and light, by which the Prophets, who submitted themselves to God’s Will, judged the Jews.  And the rabbis and the priests too judged the Jews by the Torah for to them was entrusted the protection of God’s Book, and they were witnesses thereto.” (Quran, 5:44)

Allah (SWT) says that the story of Moses (AS) and Pharaoh in Quran is the truth.  It is a story of political conspiracy and of oppression that knew no bounds. In Holy Quran it is mentioned in this way: “We recite to you some of the news of Moses and Pharaoh in truth, for a people who believe.  Verily, Pharaoh exalted himself in the land and made its people sects, weakening (oppressing) a group (i.e. Children of Israel) among them; killing their sons and letting their females live.  Verily, he was of those who commit great sins and crimes, oppressors, tyrant.” (Quran, 28:3-4) 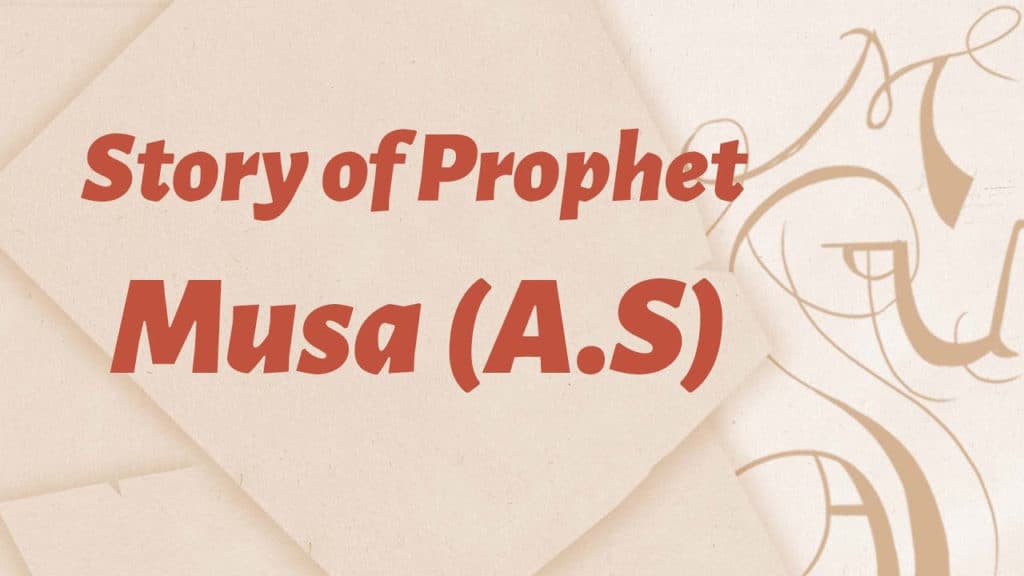 Below we will describe the story of the Musa (AS) in detail from the beginning of His birth, how He (AS) brought up in the house of Fir’aun and other events of His life.

Musa (AS) was born at the time of Fir’aun which was the most politically charged time of the history. The Pharaoh or Fir’aun of Egypt was the dominant power in the land.  He was so incredibly powerful that he referred to himself as a god and nobody were able to dispute this. He set up class distinctions, divided the people into groups and tribes, and set them against one another.  The Jews, the children of Israel, were put at the lowest level of Egyptian society.  They were the slaves and servants.  The family of Musa (AS) was from amongst the children of Israel.

A short while before Prophet Musa (AS) was born, Fir’aun was told that a boy from the Bani Israel would soon be born and at whose hands Fir’aun’s kingdom would be destroyed. On hearing this, the cruel king ordered his soldiers that every male child born to the Bani Israel should be killed. The soldiers of Fir’aun periodically searched the houses of the Israelites so as to carry out Pharaoh’s orders. Musa’s (AS) mother had prepared a plan for him. When she heard the approach of the soldiers, she took Musa (AS) out in his basket and placed him in the river Nile at behind of her house. In Holy Quran it is mentioned in these words: “So We sent this inspiration to the mother of Moses: “Suckle (thy child) but when thou hast fears about him cast him, into the river, but fear not nor grieve: for We shall restore him to thee, and We shall make him one of Our messengers.” (Quran, 28:7)

The basket in which Prophet Musa (AS) was put in by his mother floated towards the palace of Fir’aun, where his men fished it out and brought the baby to him. He wanted to kill it immediately, suspecting that it might be a child of the Bani Israel, but his wife Aasiya, who was a pious woman, stopped him by doing so. They did not have children of their own, so she asked him to adopt the child. Fir’aun agreed to his wife Asiya’s request and then called some women to feed the crying child. Yet, the baby refused milk from all the women who came to feed him, except his own mother. In this way, Allah Almighty rejoined mother and child in the palace of Fir’aun who was the greatest enemy of her son.

Prophet Musa (AS) grew up in Fir’aun’s home and was familiarized with the state affairs. When He (AS) reached adulthood, once involved in a fight between an Israelite and an Egyptian, results in killing the latter recklessly. Prophet Musa (AS) went to the Madyan where he married Safura daughter of Prophet Shuaib (AS). After staying some time in Madyan, he left to return to Egypt. On their way to Egypt in the severe winter night Prophet Musa (AS) and his wife who had lost their way, saw a fire in the distance. Prophet Musa (AS) told his wife to stay where she was and he went to the fire, thinking he would bring some of it back. When Musa (AS) reached near the fire he saw that the flames were coming from a green tree but there was no one present. While Prophet Musa (AS) looked around in surprise, he suddenly heard a voice saying, “O Musa, I am your Lord!” The voice then asked him to throw his stick onto the ground. At once it changed into a serpent, which scared him. Musa (AS) was then commanded to lift the snake without any fear and as he did so, it changed back into a stick.

And then he was told to put his hand under his armpit. When he drew it out again, his hand glowed with a bright light, like the sun. The Divine voice said to him, “O Musa! These are the two great Signs of your Lord. Go back to Fir’aun and his people and invite them towards your Lord!” After getting these signs from Allah Almighty Musa (AS) went to the Fir’aun and told him that He (AS) is the messenger of Allah Almighty for that He has proofs. Musa (AS) threw his stick on the ground and it changed into a snake. The miracle frightened Fir’aun and he turned to his ministers for advice. They told him that Prophet Musa (AS) was just a good magician and that their own magicians could easily perform such tricks.

Then Fir’aun called all the great magicians to his court so that they could do the same tricks as Musa (AS) did. When they were told what had to be done, they were not worried. They threw pieces of rope on the ground and these cords began to wriggle like snakes. But when Prophet Musa (AS) cast his stick down his serpent ate all the pieces of rope. The magicians immediately realized that this was no magic but a miracle, and prostrated saying, “We believe in the faith of Musa”. Allah Almighty told Prophet Musa (AS) to warn Fir’aun that He would punish him and his people if they continued in their ways and don’t accept your faith. But Fir’aun was too proud to listen to the warning.

So, for punishing him and his followers the country was hit by famine. Swarms of locusts ate away the crops. The river Nile flooded its banks causing great destruction. The people were afflicted with lice and tumors. When all of this happened the people rushed to Prophet Musa (AS) asking him to pray for their relief and promised to follow his religion. But when they were cured and the situation improved, they returned to their idol worship.

Musa (AS) gathered the people of Bani Israel and left for Palestine. When Fir’aun learned of their escape he followed them with a huge army. When Musa (AS) with people of Bani Israel reached the Red Sea they saw Fir’aun approaching towards them and were sure they were going to be killed. Yet, Prophet Musa (AS) struck the waters of the sea with his stick and the waters parted, making a dry path. The people crossed safely. When Fir’aun saw the path he entered the sea at the head of his army. But while he was in the middle of the sea the waters suddenly closed around him and his men. In this way, Fir’aun and his army drowned and died in the river.

Featured Decoding the DNA of an entrepreneur

By Moin Qazi All men dream, but not equally. Those who dream by night in …