Breaking News
Home / Muslim Mirror / Sufi Ittehad-e-Millat Tanzeem launched : ‘Not agent and supporter of the government but the Constitution’

Sufi Ittehad-e-Millat Tanzeem launched : ‘Not agent and supporter of the government but the Constitution’

New Delhi:  A new organisation ‘Sufi Ittehad-e-Millat Tanzeem” was launched here on Sunday with the aim to dispel the wrong notion that Sufis and Shrines are supporting the agenda of the present government. The leaders of the new organization alleged a fake narrative of nationalism is being created to suppress minorities, Dalits, tribals and weaker sections. 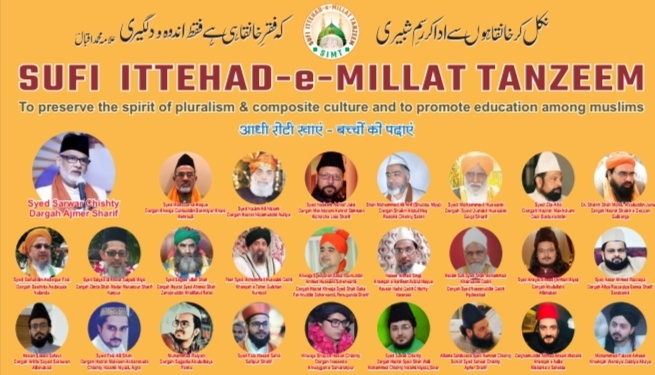 The leaders addressed a press conference to announce the launch of the outfit. Founder of the new outfit, Syed Sarwar Chishti, who is also Khadim of the Ajmer Sharif Dargah, said a fake narrative is spread that Sajjadanashins and Sufis are supporting the government and its “repressive policies”.

We want to make it clear that Sajjadanashins and Sufis are not ‘agent and supporters’ of the government and there may be some black ships among our ranks but we are not a supporter of any political or the government, Chisti said in an oblique reference to All India Sufi Sajjadanashin Council which recently met government officials and announced its support to government agenda.

It is history that Dargahs and Sufis always raise the voice of truth and never sided with the government of the day and we want to revive this noble tradition as the country is passing through a critical juncture since the advent of fascist forces to the power, Sarwar Chisti said.

Launching a scathing attack on the government, Sarwar Chisti said when people rise against the anti- minority and anti- farmers’ policies; they are dubbed as “Pakistanis and Khalistnis’. While referring to a plethora of ordinances namely “Love Jihad”, Cow slaughter and others, he said the Constitution is being attacked and   we want to safeguard it.

He also said the Tanzeem’s aim is to foster and promote communal harmony as it is under serious strains due to nefarious activities of the communal and fascist forces. Tanzeem will also work for unity among Muslims and promotion of education, he added.

Speaking on the occasion, activist and Supreme Court lawyer, Mahmood Pracha stressed the need to protect and strengthen the Constitution which safeguards the fundamental rights of the people.

Referring to the heavy presence of police personnel at the site of the event, Pracha said the ‘Manuvādi’ mentality only fears the Constitution which gives equality before law to every citizen of this country.  Pracha, whose offices was raided by the Delhi police recently, said Sufis have taken good step to save the constitution and added that Islam was spread in the Sub-continent not because of Muslims rulers but of Sufis’s good manners and character which need to be revived.

The Delhi Police allegedly tried to scuttle the Press meet reportedly at the behest of a tiny section of Sufis who are siding with the government and formed their organization All India Sufi Sajjadanashin Council (AISSC).

The organizers of the meet said they have been forced to cancel two venues India Islamic Culture Center and The Park-Inn by Raddison hotel.  When shifting the press conference at the Hotel Riverview situated in Abul Fazal Enclave in Jamia Nagar, Police said you have not taken permission for the meet, the organizers said.

As many as 25 prominent Sajjadaanshins and Sufis from across the country participated in the launching event of the Tanzeem.

Share
Previous From paediatrician to history-sheeter — The journey of Kafeel Khan
Next Citizenship Act Rules “under preparation”, Centre gives time till July