Syncretic culture: A sentinel against radicalisation/terrorism

‘Syncretic culture’, Ganga Jamuni Tehzeeb’ and assimilative cohesion have remained the strength of social fabric of India which also worked as an embankment against evil forces, from within and from abroad trying to create a divide among the people including infesting them with extra territorial loyalties, often in the name of religion. Sufies, Fakirs, Saints with message of ‘ the oneness of God’ / ‘ Humanity- the best religion’, Rulers patronizing all religions without any bias, and humane bonding among the people kept warding off religious radical groups to create social chasm which is evident from negligible sway of Indian Muslims towards the fervent appeal of ‘Jihad’ by ISIS, AQIS and the outfits operating from our neighboring countries. While ISIS had drawn thousands of Cadets from Western, Middle-East and African countries, only 169 Muslim Youths mislead by radicals/outfits, travelled from India to ISIS zone. Even in the case of militancy in the State of J&K, ‘Kashmiriyat’, the parochial identity was misused as religious identity by vested interests. It is worth mentioning that about 10,000 Ullama had sternly condemned terrorism by global groups or Non State Actors across the borders, subsequent Pulwama Attack.

Thus,’ Unity in Diversity’ & ‘Cultural Assimilation’, the bulwark of Indian democracy as well as the people committed to it, would always keep the country first while exposing and ostracizing the proscribed evil designers like ISIS and groups of its breed.

Share
Previous India with peace, harmony and tolerance in its making has no place for Religious violence/divide
Next ISIS: not ‘Jihadi’ but ‘Fitna’ 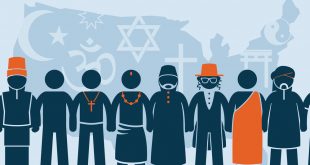 What does Islam say about other religions?

Allegations of mistreatment of Muslims in India is misleading