The A (zam) to Z (afaryab) of Muslim Politics in UP

The last forty years of UP politics and more specifically Muslim politics has been rocked by the duo Muhammed Azam Khan and Zafaryab Jilani, the former a LLM (Masters in Law) dropout and the latter LLM gold-medalist from Aligarh Muslim University, and both are credited to have learnt their politics from their political ideologue Dr. Abdul Jaleel Faridi. Dr. Faridi was the founder of Muslim Majlis (in 1968) which is credited to have made Muslims ‘to first start to speak’ against the atrocities done to Muslims by the perpetual Congress regimes. It was Faridi who first articulated the formula of Muslims, Scheduled Castes and Backward Classes to forge an alliance to stand to Congress. Muslim Majlis once was also a part of UP government in 1977 (with eight MLAs) and also at Center with two MPs i.e. Basheer Ahmed from Fatehpur and Zulfiqar-ul-Lah from Sultanpur. Dr.   Faridi was initially a member of Socialist Party and had an ideological affinity with Mulayam Singh Yadav and whenever Kanshi Ram, the founder of BSP referred to ‘Dr. Sahab’ people thought it was for Dr. BR Ambedkar but ‘no’ it was for Dr. AJ Faridi, he once confided. 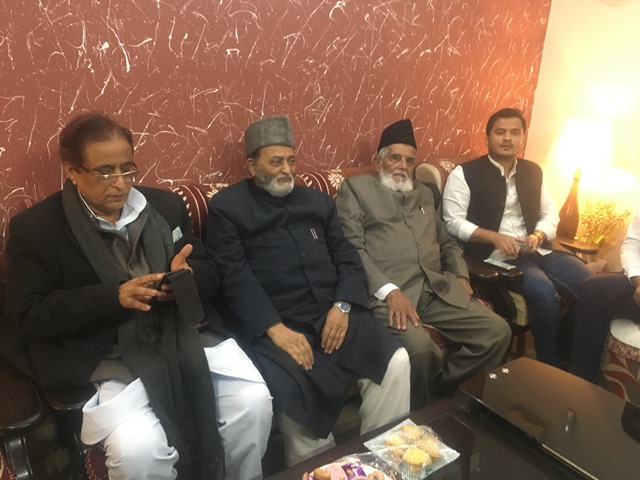 From Left to Right- Muhammed Azam Khan, Zafaryab Jilani, Mushtaq A Siddiqui and Abdullah Azam on Feb 5, 2019 in Lucknow

Dr. AJ Faridi offered seat to Jilani from Lucknow Central but Jilani could not contest and instead proposed Adeeb Ahmed, who later went on to become Rajya Sabha MP.  Azam fought on Majlis ticket and lost in 1977. Azam since 1980 has won his seat nine times from Rampur. Jilani persisted with his practice of law under the stalwart Shafiq-ur-Rehman Sahab and both Azam and Jilani were to soon exhaust themselves into conducting relief-work for months together after the Moradabad riots were orchestrated by India’s PM Indira Gandhi in 1980.

The Baggage of Babri Masji

Very soon the political one-upmanship over Babri Masjid was to be resurrected by Congress. It has nothing to do with Shah Bano case (1985) as Dau Dayal Khanna, Congress Minister and MLA and Nirmal Das Khatri Congress MLA and Minister were spearheading  Rath Yarta for opening of Babri Masjid- locked  since 1949, by 1984 during the life of Indira Gandhi.  Her son Rajiv Gandhi obliged by opening the locks of Babri Masjid on February 1, 1986 and Babri Masjid Action Committee (BMAC) was formed which gave a protect call on February 6, 1986  and very obviously Azam Khan and Zafaryab Jilani were arrested and sent to  Lucknow jail where Mulayam Singh Yadav came to meet them.

Thus, was laid the bedrock of future leadership in UP. Congress could not even dream of a comeback since 1989 as its polling strategy to bolster Brahmin and Upper Caste Hindus as leaders, throw attendant benefits to Dalits and keep Muslims under permanent paranoia of Jana Sangh, the earlier avatar of BJP, has totally boomeranged. Its entire Hindu vote bank has shifted to BJP in the last three decades.  Azam and Jilani are the ‘partners’ to have campaigned in thousands of rallies to break the Muslim jinx to make Muslims come out of Congress hoodoo and rally for Samajwadi Party in its cardinal campaign for social-justice.  Both were co-conveners of BMAC.

The Binding Sentiment of AMU

When SP government was in UP-2003-07, there were some differences which had cropped between Azam Khan and Zafaryab Jilani, but when Justice Arun Tandon ruled out, in 2005, that AMU was not a minority institution, we organized a series of seminars to sensitize public opinion on the subject. It was quite a surprise that Azam and Zafaryab both shared the same stage, as after all it was their Alma Mater which made them stick-together and also for the sense of belonging to the ‘school of thought’ of Dr. AJ Faridi who relentlessly had articulated the cause of minority status of AMU against the onslaught on it by Indira Gandhi.  Quite understandably, UPA government under Manmohan Singh too let it go until 2014 and did not bring the much desired amendment to end the controversy once and for all. The peers of Manmohan Singh had already laid the path when in 1972, Indira Gandhi brought AMU Amendment Act, in stark contravention to Beg Committee recommendations, and when Muslims organized a peaceful protest 10 Muslims in Benarus and 56 Muslims were shot dead in Ferozabad! Indira Gandhi was also the Home Minister then. RSS was then at the back of Congress and surely it did not surprise anyone when RSS mouthpiece The Organiser editorial likened the SP government of 2012-17 to be that of Muslim League as Javed Usmani, was Chief Secretary,  Zafaryab Jilani was AAG and Azam Khan was one of the most powerful cabinet ministers. Javed Usmani later became my colleague at UP Information Commission.

I for that matter met Azam Sahab and Zafaryab Sahab at the official residence of Azam Sahab at 34-B Darul Shifa , Lucknow in 1993 when my graduation was underway, and ever since have peddled the cause of law alongside the two.  I did always persist that both should ‘melt their differences’ and remember it that in 2012 before Akhilesh JI was to swear to office, I got a phone call from Zafaryab Sahab that he is likely to join as AAG and that I see that Azam Sahab gives a nod to it which he did after I related to him. I also remember Azam Sahab giving me a phone call before he was moving-out from his Darul Shifa residence to take ‘oath of secrecy’ in 2012. It was in context that he was able to desist Akhilesh Ji to take part in India Today’s conclave in which Salman Rushdie was to be present.  Azam Khan also spoke to me on phone right after the moment when Naresh Agarwal, the traditional turncoat had wanted Azam may resign, when the latter did not attend to SP national convention in 2013. It becomes quite relishing for me to have organized a dinner at my place on February 5, 2019 in which Azam Khan Sahab, Zafaryab Jilani Sahab and Mushtaq Ahmed Siddiqui Sahab sat together. MA  Siddiqui was instrumental into ‘getting-stayed’ the vacating of SP office at Vikramaditya Marg when UP Ex. CM Mayawati had wanted it so in 1995. The dinner was also attended by Rehan Naeem (Ex. MLA), Muhammed Faheem (MLA Bilari) and Abdullah Azam (MLA Suar Tanda) and other dignitaries. 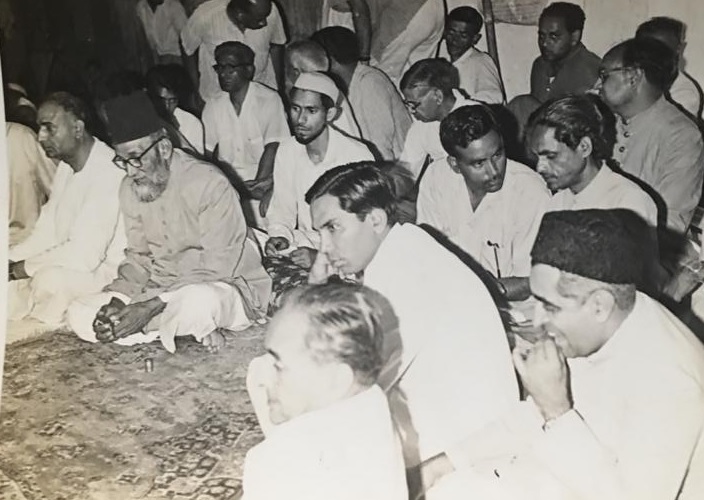 Dr AJ Faridi, at a conference of Muslim Majlis in Bijnor, UP ( Courtesy-Urdu Media Monitor).

The Most Credible Voice

There had never been a cue from history, except from the medieval period, when the worst political vendetta had to be orchestrated on Azam Khan as he despite sitting in the highest office of the country, has been slapped with around 100 and is in jail since February 2020 at Sitapur. There is not even a dearth of respect left for political opponents in the country. Zafaryab Jilani, during the NRC/CAA protests was busy ‘round-the-clock’ into bludgeoning his army of lawyers, a sizeable number of them being non-Muslims, to get to the rescue of hundreds of Muslims taken into arrest. It is no doubt that due to the immense credibility of Zafaryab Sahab dozens of most-outstanding-lawyers pleaded from the Muslim side in the Babri Masjid case that too without any cost. It was Zafaryab Sahab who counseled Mulayam Singh, in the morning on August 30, 2010, who along with Lalu Prasad Yadav tore away the Enemy Property Bill later in the afternoon in Parliament and Congress withdrew the Bill.  No wonder, these proverbial awesome-twosome have been the most credible voice of Muslims in UP. It was Azam Khan who was expelled from SP and all the 14 Muslim candidates from SP lost the 2009 general elections.

I in my most humble capacity recollect only a small of the yeoman services which I could witness by the two stalwarts. I could write more than 250 articles published in standard journals and media outlets owing to human and civil and legal rights.  More than a five dozen pieces occurred on the issue of Babri Masjid which I could scribble out of the copious notes I took with Zafaryab Sahab. When NDA Law minister Arun Jaitley under AB Vajpayee intended to occupy land around Babri Masjid in 2003, Zafaryab Jilani single-handedly thwarted the move in the wake of Ismail Farooqui V’s Union of India SC order of 1994. Azam Khan had taken UP CM Mayawati by storming the well-of-the-house when she refused to issue a fresh-notification after CBI Court had exonerated LK Advani from the conspiracy charge of demolishing Babri Masjid in 2003.  I watched it from the gallery in Vidhan Sabha. Zafaryab Jilani, without the slightest diffidence conducted dialogues with Five Prime Ministers and never flickered from the point of surrendering Babri Masjid to the Hindu side, until came the SC order on November 10, 2019, where  Muslims won the case but lost the land. I vividly reminisce when Azam Sahab introduced me to Akhilesh Ji in 2011 as a ‘great-writer’ which I am sure he exaggerated out of his belongingness to me. Last but not the least; it was I who had provided Zafaryab Sahab with the notes of the proposed Enemy Property Bill -2010 which was overseen by the erstwhile Congress Home Minister P Chidambaram and later Rajnath Singh to end to the ultimate disadvantage of Muslims. 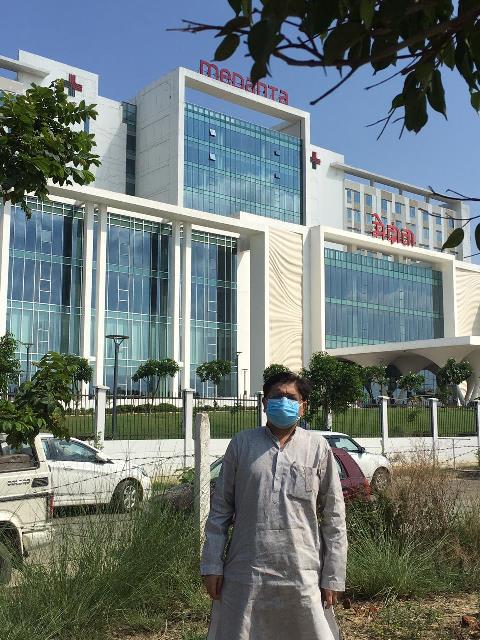 The writer at Medanta Hospital

The entire Muslim community is passing through hemorrhage and the ‘two-heroes’ of Muslims, as well as of millions of secularism loving Indians, are very ironically in the same hospital while ‘prayers and fasts’ for them  are being observed by all communities across the board.  We all wish both recover all the very soon to carry UP, which leads the road to Delhi, to stride to ‘secularism-socialism-victory’ in 2022 and later in the country in 2024.

The writer is a former UP State Information Commissioner and a political analyst.

LAST WEEK as the veteran film star Dilip Kumar was hospitalised, I took out my …