The ‘decline’ of All India Muslim Personal Law Board 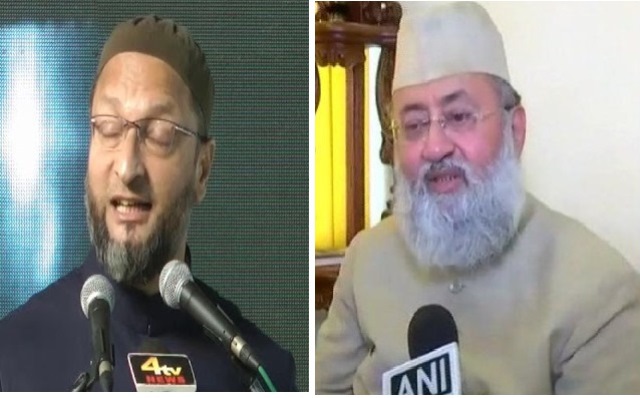 It is  disgusting  to see the Hyderabad MP and Majlis–e–Ittehad-ul Muslimeen  Chief Asaduddin Owaisi stooping to such a low for deriding and degrading Maulana Salman Nadvi publicly who may unwittingly has fallen into the trap of RSS on the Babri Masjid and Ram Mandir issue.  Being one of the prominent members of the Board, Owaisi did not show any decency and gracefulness while demonizing Maulana Nadvi in the public meeting organized by the All India Muslim Personal Board in Hyderabad.

Maulana Nadvi’s self-styled attempt to solve the Ayodhya dispute with the help of  controversial and self-appointed Godman Ravi Shankar who has been guilty of not complying the NGT order, has invited wrath from Muslim community. However, it does not mean one can  call him names or level wild allegations on him simply because he had a different opinion on certain issue.

Despite being the member of the Board, Maulana Nadvi broke the ranks on the Babri Masjid issue, he deserves reprimand but not invectives.

No doubt, Maulana Nadvi’s meeting with Ravi Shankar was an imprudent and untimely act but  the reactions of some Board members were more disgraceful that needs to be equally condemned.

In fact, Maulana Nadvi shouldn’t have met with a person like Ravi Shankar who was in no way related to the Babri Masjid case, also known as ‘Sri Sri’ , a self-styled  Hindu guru who never spoke a single word against the killing of Muslims by the so-called Gau Rakshaks across the country under Modi govt. Although he he sports white- robes but he is deeply  Saffron from inside

It would have been better had the Board ignored  Maulana’s  meeting with Ravi Shankar considering it as an ‘individual’ act .

The meeting of Maulana Nadvi like other Ulemas and Muslim leaders meetings with Sri Sri cannot be considered as an official step of the Board.

The better course might have been for the Board to reject such meetings and issue a clarification of disassociation from such efforts.

There was no need of taking any punitive action and insulting Maulana in public if he had a voice of dissent and had a different  stand against the general view of the Board because any democratic setup provides a platform for airing dissent and diverse views while the Board is also  such a platform. The other members of the Board should have downplayed the issues staying away from giving public counters and rejoinders.

The sweeping allegations made by Owaisi against Maulana Nadvi in the public meeting of Board  is highly condemnable.  Some members of the Board had also met Ravi Shankar earlier  on the same issue and given a statement opposite to the stand of the Board. One can ask, why no action had been taken against them?

What about those Board members who are politicians and loyal to the Congress which is the main culprit of the demolition of  Babri Masjid? Owaisi’s father was himself a Congress supporter and a close friend of the then  Prime Minister Narasimha Rao when the Masjid was demolished . Many people are of the view that ‘Salar-e- Millat “had struck a deal with Congress”. According to that deal,  Rao provided a piece of land to late Salahuddin Owaisi at a  prime location in Hyderabad. The Salar e Millat had to give clarification several times regarding that ‘alligation’. Owaisi and his MIM were also with the Congress until a few years back.

Whether Maulana Salman Nadvi is acting at the behest of BJP, it is yet to be confirmed but one thing could be said with certainty that the politics of Owaisi is strengthening  BJP steadily. Owaisi communalises even general issue like Demonetization by saying that ‘Muslims are the worst sufferers due to Demonetization’ and this only suits BJP .

Dialogue as a channel in a democracy to solve the disputes may never be ruled out. So any proposition for dialogue with the parties that are relevant in Babri Masjid dispute could be engaged in seeking a solution to the satisfaction of both  parties.

As the ground reports of Ayodhya indicate that a sizable population prefers the simultaneous construction of Temple and Masjid side by side. Therefore, if the dispute is left to the local population while asking outsiders, be it political or religious leaders, to remain aloof from the issue the residents of Ayodhaya can find a best solution  . There is a ray of hope in mutual cooperation because  ‘the court’ judgment in favor of any party may not lead to a lasting solution. The defeated party may resort to further agitation  and communal polarization for the purpose of vote-bank, so it is necessary for the Board to reassures the country that if it wins the case it would thereafter enter into a dialogue with the originally contesting parties to assuage and respect the feelings in the larger interest of the country.

The Board members who are overconfident  about the verdict on  Babri Masjid case in their favor should rethink twice, least they have to regret on the day of  Apex court verdict and say ‘we should have considered the options outside the court to get a respectable solution’.

The judgment of Allahabad High should be an eye-opener.