The ‘design’ of making Muslim votes insignificant in Bihar

Even as NDA is battling a strong anti-incumbency wave ahead of Bihar Assembly election the formation of two additional fronts could provide some breather for it. The composition of both the front primarily featuring Yadav, Muslim and Dalits– the constituencies on which the opposition Grand Alliance’s hope depends– suggest some design.

True, Muslim voters are as politically conscious as any other community of the state. Thus, in spite of leaders like Chandra Shekhar Azad, Pappu Yadav and Assaduddin Owaisi touching their sensibilities, it is highly unlikely that they will vote for these leaders in any sizeable number, considering they do not have a social base. 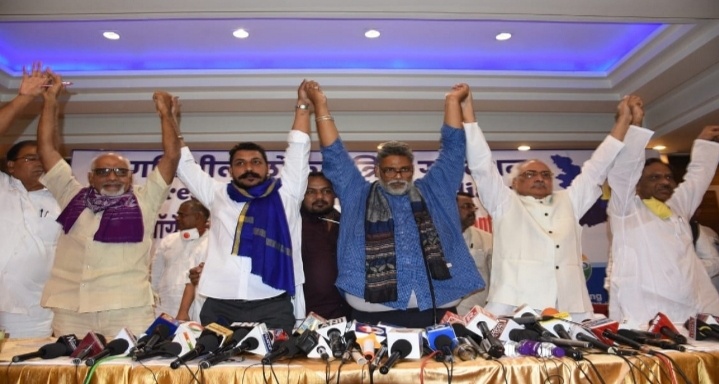 Yet, apart from their appeal since these leaders are fielding large number of Muslim candidates, it could certainly cause confusion. This is also due to the fact that AIMIM is known for its community-oriented rhetoric. Ironically, the Hyderabad based party goes overboard to blame the Congress and RJD for the backwardness of the community in the state, though the duo has been out of power for the last one and half decades.

What is inherent in this type of Muslim politics is that it causes counter polarisation. Be it in Bihar, Jharkhand and UP and Bihar the AIMIM has got insignificant number of votes, yet the party has succeeded in pushing a large number of neutral majority community votes towards the BJP.

“Our objective is to poach away as much Muslim vote as possible as we know they would primarily be voting for RJD and its allies. Even if we get success in tucking away 10-15%votes, it would cost Grand Alliance dearly and consequently will ease the way of NDA” a Janata Dal United leader privately revealed the strategy of his party to this correspondent.

JDU has given tickets to 11 Muslims candidates therefore it is clear that the party is going along with its plan. What is important to note here is that despite strong prevailing anger of common Muslims towards JDU after the party supported the Citizenship Amendment Bill a section of religious leadership have been still showing their loyalty towards chief minister Nitish Kumar.

Similarly, efforts are on by all the alliances to woo Yadav voters by giving tickets to a sizeable number of candidates of this caste. Though JDU has given tickets to 19 Yadav’s yet it is expected that the votes of this caste will overwhelmingly go for RJD.

If even a small amount of Muslim and Yadav get scatter it may spoil the prospect of GA in some constituencies, where the battle is very tough.

Independent political observers fear that the scattering of Muslim votes may in the long run decrease the electoral importance of the community in the state.

Shams Khan is a Patna based journalist.

Share
Previous Soyeb Aftab creates history, first to score 100% in NEET exam
Next Mathura Shahi Idgah Masjid : We should not be negligent this time