The Rise of Saffron in Indian Cinema 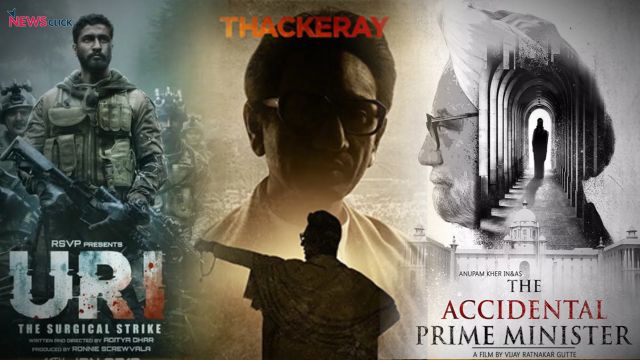 Commercial Indian cinema is levelling up its political ante in favour of the ruling government and falling in line with the elections on our doorsteps.

This year is going to witness a different kind of commercial Indian cinema with the release of movies like The Accidental Prime Minister, Uri, and Thackeray. The Modi “wave” that apparently hit the shores in 2014 has taken its course to translate itself into cinematic narratives of hyper-nationalism and toxic masculinity that negotiates the line between good men and bad men, and divisive propagandist politics.

Anand Patwardhan, Indian documentary filmmaker known for his socio-political, human rights-oriented films, said while talking to Newsclick, “I have not seen any of the three Bollywood films to be released in time for the elections, but I am almost certain that all would fall into the category of pro BJP propaganda, just as 95 per cent of all electronic and print media do. If not for such sustained propaganda, the distress and unrest brewing in the country would have been front page news.”

Thackeray: “Stood for his people”

Based on the life of the late politician Bal Thackeray, founder and chief of Shiv Sena, the biographical drama film is scheduled for release on January 25, 2019 – 93rd birthday of Thackeray.

The bilingual film (Hindi and Marathi) targets two sets of viewers separated by linguistic, temporal and regional locations. The trailer features dialogues of nativist politics, which were the foundational phase of the Shiv Sena in 1960s, and stirs anti-migrant sentiment as a persuasion to unite “one’s own people” or one’s own voters in case of BJP and Hindutva-nationalism.

Bal Thackeray has been projected as the saviour of the common man, possessing strong and militant ideas of justice. The trailer flashes attributions such as, ‘Ideal’, ‘Revolutionary’, ‘Activist’, ‘Fighter’, ‘Leader’, and glorifies a man who wielded more power than leaders of the state.

The Srikrishna Commission Report that came out in 1998, clearly underlined Shiv Sena’s role and Bal Thackeray’s leadership as responsible for the riots of December 1992–January 1993 in Mumbai. Still, Nawazuddin Siddiqui, who was recently critically acclaimed for his role as the lead in Manto, seems to have undone the legacy of Manto by delivering the xenophobic comments through his character in the film, such as “Uthao lungi, bajao pungi (Strip them, s***w them)”, and has therefore been called out by several social media users and actors such as Siddharth, who said in a tweet:

“Nawazuddin has repeated ‘Uthao lungi bajao pungi’ (lift the lungi and *’#$ him) in the film #Thackeray. Clearly hate speech against South Indians… In a film glorifying the person who said it! Are you planning to make money out of this propaganda? Stop selling hate! Scary stuff!”

In the teaser launch event of the film, Nawaz had said that to play such a character was an actor’s dream, “Duniya ka koi bhi actor karna chahega! (Any actor in the world would want to play this character!)”

“This apolitical distancing of the art from the artist or of art from reality, is a long cloak of hypocrisy worn with pride by mainstream Hindi cinema, because as the January roster of Hindi films go with Uri, and The Accidental Prime Minister all lined up, these pretensions are soon falling off,” writes Kanika Katyal from Indian Cultural Forum.

Is the new India, a better one?

With the already over-hyped “surgical strike” that the Indian media hysterically indulged in to represent BJP’s patriotic muscularity and valour in defending the country, the film ‘Uri: The Surgical Strike’ is set to release hit theatres on January 11. There are dialogues that seem to be invoking the spirit of hyper-nationalism such as: “Yeh naya Hindustan hai, yeh ghar mein ghusega bhi, aur marega bhi.” (This is a new India, it will infiltrate the house, as well as slay inside.) “Waqt aa gaya hai, khoon ka badla khoon se lene ka.” (It is time to take revenge with blood.)

The celebratory charade by the Army leadership, and BJP’s boastful politicisation of the surgical strike might get people to believe it to be a success. However, many have questioned its effectiveness in deterring terrorist attacks.

The former foreign secretary S Jaishankar said to the Parliament Committee on Foreign Affairs, calling the strikes: “Target-specific, counter-terrorist operations (CI ops) across the Line of Control which the army had done in the past too, but this is the first time the government has gone public about it.”

Directed by Aditya Dhar, produced by Ronnie Screwvala and starring Vicky Kaushal, Uri weaves its narrative around the “surgical strike” carried out across the Line of Control (LoC) in September 2016. The warfare film will further BJP’s nationalistic narrative, glamorising the already hyped ‘feat’ and validating BJP’s ‘courage’.

“The more the government politicises the army by using its sacrifices to further its electoral objectives, the more it erodes the army’s potency, and hence its’ deterrent value,” writes Pravin Sawhney for The Wire.

BJP’s blatant propaganda The Accidental Prime Minister, the trailer of which was released on December 27 was further shared in a tweet by the BJP’s twitter handle on the same day: “Riveting tale of how a family held the country to ransom for 10 long years. Was Dr Singh just a regent who was holding on to the PM’s chair till the time heir was ready? Watch the official trailer of #TheAccidentalPrimeMinister, based on an insider’s account, releasing on 11 Jan!”

This promotion of the movie and the insinuation at the primitivism of dynastic politics, in an environment where BJP’s being asked tougher questions on their tall promises and a long list of failures, is undoubtedly and unsurprisingly BJP’s attempt at turning people in their favour.

Many from within the BJP have objected to the official Twitter handle promoting the film, for the obviousness of their motive and the uninvited certification of nationalism. Sanjaya Baru, the author of the book from which the film is adapted, was Dr Singh’s media advisor from May 2004 to August 2008. As Baru has claimed in an interview with The Indian Express, he has tried to defend Dr Singh, give him credit for his achievements and exonerate Dr Singh’s label of being the ‘silent PM’.

However, the dramatisation of the film not only echoes the BJP’s age-old narrative of Congress being a ‘family-fiefdom’ and Rahul Gandhi being the ‘shahzada (prince)’, but in light of Dr Singh’s passivity, it depicts Sonia Gandhi as the woman who impiously controlled the seat rather than occupying it herself.

A lawyer named Sughir Kumar Ojha has filed a case against Anupam Kher and 14 other associated members of the film on January 2, Wednesday. The case against the movie for damaging the image of top bureaucrats was filed in Muzaffarpur’s chief judicial magistrate court. Surprisingly, the court has admitted the case, and has fixed January 8 as the hearing date.

The petition was filed under IPC sections 295, 153, 153A , 293, 504 and 120B relating to promoting enmity between different groups, sale of obscene objects, insult with intent to provoke breach of peace and criminal conspiracy, reported The Indian Express.

Sanjay Kak, a renowned self-taught filmmaker, who won the National Film Award for best non-feature Film in the year 2000 and one in 1985, spoke to Newsclick. He said, “These are election films, first and foremost, one for the Shiv Sena, the other two for the BJP. And like elections, the box office will decide if the spin works.”

He further added, “Who can take on the truth-claims of Sanjay Baru’s kiss-and-tell account of the “Accidental Prime Minister’ when the BJP and its cronies are enthusiastically rooting for it. And who can, once again, ask if the ‘surgical strike’ after Uri was indeed the triumph that TV channels claim it is.”

These films are about our present, one that is hugely argued about, but they have not been made with the intention to have a conversation about. They are propaganda films as BJP’s tweet clearly implies.