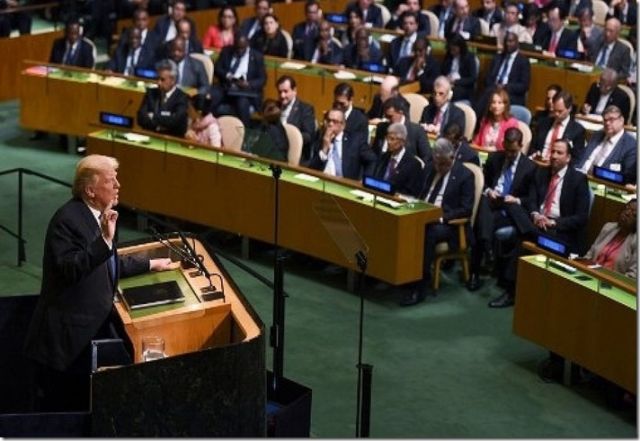 “….Human nature is at least in part wicked and in part foolish, how can human beings be prevented from suffering from the results of their wickedness and folly? ….Men simply do not see that war is foolish and useless and wicked. They think on occasion that it is necessary and wise and honourable, for war is not the work of bad men knowing themselves to be wrong, but of good men passionately convinced that they are right.” (C.E.M Joad. Guide to Modern Wickedness, 1936).

To Understand the Failure of Global Organizations and Leadership

The global humanity is continuously oppressed, manipulated and victimized by the weapons of mass destruction – from thoughts to all kind of weaponry. Global peace, conflict management and security are neglected by those who were responsible for its protection and maintenance. Everything thinkable appears to be falling into dereliction and much wanton destruction to be reported as non-living statistic. The UNO Secretary General and most global leaders are entrapped lacking reasoned persuasion and activism to make peace and usher global harmony. They operate in a vicious circle of making statements, tweets and speculative wishful overtures as if the whole mankind was inept and inattentive to the catastrophic challenges of the day.

Good judgments seek honesty of purpose, courage and rational thinking. When the leaders talk about the emerging conflicts and human tragedies, they pretend as if none had ever happened before. As if they never opened the pages of history. History offers lessons to all generations all the time. Human perpetuated tyranny according to late Professor Howard Zenn is “tyranny.” Insanity has no alternative rationale. Look how the UNO leadership and most global politicians witness transgression, forcible displacement and killings of millions and millions across Syria, Iraq, Palestine, Libya, Myanmar (Burma) and now Yemen but do nothing except the fake UN-SC resolutions and dubious statements of crimes against humanity. The victimized mankind shares a sense of disarray and loss of being part of the global humanity. A view from afar only asserts conspicuous example of inhumanity flourishing everywhere and seeing the proliferation of anarchy, violations of basic human rights and dignity and use of chemical weapons, and civilian massacres but nobody questions why this now after the Two World Wars? Typical “Right Men” of the 21st century are unchallenged for torture, killing of the innocents, war crimes and genocide. The UNO Fact-finding Mission released the findings after 700,000 Rohingas were forcibly evicted from their homes; 20,000 men, women and children massacred and 10,000 women raped by the Myanmar armies. Would the Myanmar Generals be prosecuted during the lifetime of the victims? Almost 3 million civilians were killed by the US-British forces in Iraq. Nobody called it genocide by Bush and Blair. Both are free and enjoying life. Several Millions have been displaced and killed in Syria – who will punish the authoritarian tyranny and insanity?

The UNO, global leaders and related organizations are all international as the humanity fast transforming to One World reality living on One Planet with inseparable identities and relationship to the Nature of Things. The organizations and leaders should have been vigilant to “safeguard the mankind from the scourge of war.” The global political affairs are not managed by rational people, with rational thinking, doing the rational practices for the interests of global citizenry. The 1% global elite – men of king operate the international institutions – the perverted insanity lacking basic understanding of the Human Nature and of the working of the splendid Universe in which we enjoy coherent co-existence. The mankind continues to be run down by the cancerous ego and cruelty of the few Western leaders and institutions like NATO and NORAD. Most global leaders represent cruel mindset incapable to see the human side of the living conscience. Madness of the perpetuated war on terrorism and its triggered insanity knows no bound across the global spectrum. Under the false pretext of terrorism, Western allies along with Arab leaders bombed and destroyed the ancient culture and people of the Arab world. Animals do not commit massacre of their kind and species, nor set-up rape camps for the war victims, the Western led wars against the humanity have and continue to do so at an unparallel global scale without being challenged by any global organizations or leaders. Torture and massacres of innocent civilians are convenient fun games to be defined as “collateral damage” and a statistic. Perhaps, they view humanity just in digits and numbers, not as the living entities with social, moral, spiritual and intellectual values and progressive agendas for change and development. Einstein (“The World as I see it”), made it known that he was against military campaigns, killings and destruction of the natural environment: “This topic brings me to that worst outcrop of herd life, the military system, which I abhor… This plague-spot of civilization ought to be abolished with all possible speed. Heroism on command, senseless violence, and all the loathsome nonsense that goes by the name of patriotism — how passionately I hate them!.”

Lesson of History cannot be Ignored

In his internationally acclaimed classic work, Professor John W. Drapper (A History of the Intellectual Development of Europe, NY Harper Brothers, 1864), of the University of New York portrayed the human development process as “man is being treated as an individual” and not an embodiment of collective transformation leading past immersion into making of the present – and the present unfolding the future. Global humanity is a helpless victim in a world divided for socio-economic and political hegemonic controls by the few egoistic political entities. There are no conscientious leaders accountable to the interests of the global mankind. Ironically, with time and opportunities on their side, politically recognized leading powers at the UN Security Council forum failed to usher a new era of change and peaceful co-existence. If the human developmental progress is viewed in an historical mirror, Professor Drapper makes a candid observation: “that it is a history of the progress of ideas and opinions from a point of view heretofore almost entirely neglected.” All political actors claim to be working for the mankind. Yet, few could relate themselves to the people if a reality check is applied by critical analysts. One cannot glorify the insanity of the past – the Two World Wars which consumed untold planned bloodbath and countless pains and sufferings of the global mankind. The question is how to eject from the sadistic past unto a promising future?

Mankind is constantly victimized by the willful deceit of triumphalism of the few who used extreme rhetoric of peace and harmony but deliver nothing except self-serving fantasies and neglect of prevalent truth. They embrace dishonesty of purpose by wasting time and opportunities that could have been used for positive developments to change the distorted scene of the global politics. Reason makes no difference to their immature mindset and their human conscience is filled with follies of political manipulation and exploitation of the humanity. The essence of global peace and harmony lies in collective thinking and unity of the global mankind.

Bombs and wars kill people – the living human beings, destroy humanity by enforcing barbarism and cruelty, practically denying all prospects of peace and co-existence. Traditional wars were aimed at annihilation of political and economic enemies but the 21st century conflicts are ready-made recipes not only to eliminate the mankind but also the environment in which human beings survive and the

Planet Earth that sustains life. Wars appear to be the outcome of sinister minds, devilish individual plans and monstrous scheme of things against the very humanity of which these people are a living part. Like always, few cynical and mentally imbalanced people plan and wage wars against others, not mindful of the dreadful end results of their intrigues and conspiracies against life, human rights and dignity and futuristic possibilities of human survival on the planet.

Global Warlords are haunting the mankind because wars are a racketeering enterprise. Most superpowers are engaged in selling weaponry to the Middle East dictators and warlords. History will judge them by their actions, not by their claims. You cannot change a society with law and order dictum. When a problem is misunderstood, its diagnostic approach will be wrong. An out of the official box approach to understand the problem is urgently needed. The major news media corporations in North America and Western Europe are aligned to the establishments and tainted with biased coverage as they get paid via ads and secret dealings. None of this is helpful to foster change and societal advancement for a peaceful future. The mankind looks for change in strategic thinking and actions. “In the name of “System Change, Not Climate Change”, points out Paul Street (“For Intelligent Civilizations on Earth”) “we can rescue and preserve humanity and livable ecology through mass resistance and a revolutionary transformation that takes us beyond the world’s unelected and interrelated dictatorships of money, profit, empire, and eco-cide.”

Aggressive thinking is propagated, echo of peace is silenced. Global peace requires Men of New Ideas, new Thinking and New Visions. In a political culture much charged by conscious intransigence of the few, America and European are fearful of the unknown and have no vision for peace and co-existence either in the region or in a global context. NATO will go anywhere anytime under fair or foul pretexts. It has no accountability to anybody anywhere. Peace and security are not one sided pursuits nor can be experimented in a lab. There are many who could do a better and more productive leadership in the current global affairs. The Western leaders must embrace Russia on equal terms to envisage a new world of peace and harmony. Russia is no longer a former USSR but a changing landscape of reason and responsibility and gradually moving forward for a representative system of public governance. If that was not the case, how could Trump and Putin have met and strike an accord. Accords are based on mutual respect and understanding. America and Russia both need to change their policies and practices for a coherent future. Both desperately need to be proactive, culturally conscientious and intellectual unbiased leaders who should see the bigger picture of futuristic world – a different world of tomorrow of peace and co-existence rather than perpetuated animosity and extreme naïve belligerent behaviors, leaders who will serve the people and could learn to make a navigational change and adaptability to the making of a promising future for all the mankind. Mankind needs morally, spiritually and intellectually responsible leadership. All absolute rulers and leaders tried to run down the mankind as if it was a number- a digit and non-living statistic. But all of them fell in disgrace destroying their own nations and empires.

Fears Modi government may use Civil Code issue to divert attention from its failures. By …