New Delhi:  Women’s Wing of All India Muslim Personal Law Board held an  All India Bintul  Muslim workshop for young girls which concluded Thursday with massive viewership from cities, towns, villages across the country.

For the conduct of the workshop, many girls schools, colleges and Madarsas made arrangements for a projector in their auditorium halls.  Zoom had full viewership of 510 in all 6 Seasons &youtube live had 1200 – 1500 views daily.

Moulana Syed Mohammad Wali  Rahmani, Moulana Khalil ur Rahman Sajjad Nomani, and Moulana Umrain Mahfuz Rahmani delivered special lectures. They stressed on the importance of education, need to be connected with books, libraries and excel in studies. They motivated girls to focus on developing strong personality and expressed hope that these young girls will be a Messiah to future not only for the Muslim Community but for the entire Humanity. 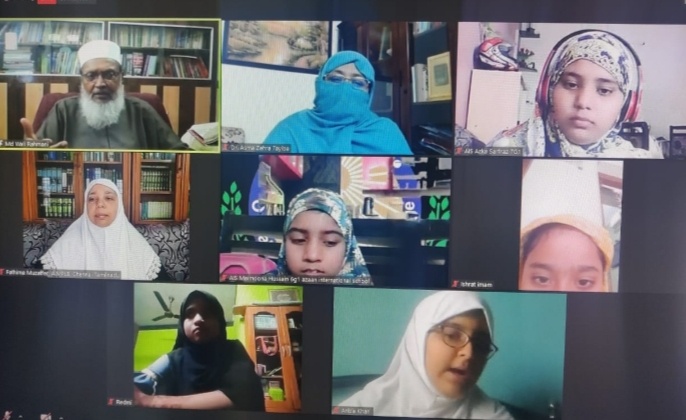 In her speech, Ms.Fatima Muzaffer from Chennai,  member of AIMPLB,  addressed young daughters as precious Gems and  Diamonds, and described them as  the most valuable asset of the community. Girls are the trend setters and change makers who will take leadership roles for the future.

Dr.Arshi Khan, Dhuliya, Maharashtra, urged girls to come close to their creator and follow the rules laid down in Shariah. She highlighted the beauty of Deen how it acknowledges the wishes and desires of a human being and guides on a principled Path, the Path of Shariah which leads to Success and Salvation.

Ms.Umme Ahmed from Hidaya Bangalore explained true love, the need to be connected to Allah, and love Him more than anything in life.  Ms.Afroze Jaffri of Patna explained the need to Read and follow the Holy Book Qur’an. It is an instruction manual.  She stressed on belief in oneness of Allah (Tawheed) & Last Day (Day of Judgment) Namaz, Roza, Zakat, Parda, Good Moral, Maintaining Good Relation, abstain from evil in society, following marriage laws, inheritance law, avoiding Interest etc.

Ms.Nayma Elahi Moradabad, explained the Spiritual Makeup through demonstration of Make up kit.  Our dress should be spiritually or Physically beautiful and physical make up should not be displayed, as display of beauty is a sin, Spiritual make up is to avoid sinning through eyes, ears, lips and tongue, she said

Dr Sumra Sultana, Jaipur, unveiled the stereotype of a hijabi girl as being oppressed.  She said Muslim Girl is an “Empowered Girl”. We cover our heads not brains, Giving Reference of Hafsa Faizal the first Niqabi American woman featured in Forbes under 30 lists. We have to break the media perspective and concocted propaganda.

Ms.Umaima Fahd, Moradabad, spoke on Time Management. The years, Months, days, hours, minutes, and seconds are blessings of Allah & need to be utilised with proper planning and Management. We must save & protect time from being spent in useless non-productive activities & focus on targets and strive to utilize every minute in the best possible way. Time is Precious and most valuable asset.

Ms.Hawwa Matin, Kolkata, interacted with girls on issues of Stress Management. She conducted a Stress test & explained that stress is Imaginary, Stress is a Silent killer, and it is a cause of modern day diseases cancer, renal failure, high pressures, heart attacks, brain stroke, stomach ulcers, and hair loss. Skin disease and most importantly PCOs, hormone unbalance. She said Beauty lies in Patience, Sabr as  the Prophet said “Amazing are affairs of Believers if something good befalls him, he is grateful and if something harm befalls him he is patient and this is good for him”.

Ms.Uzma Parekh,Nagpur, spoke  on Good & Bad friendship. She quoted Hadith “A Man follows the religion of his friends” & said a friend has to be tested by 3 things – in times of need, behind your back and after your death. Make friends who are Pious, Intelligent, and Humble, Well Wishers not a Selfish or a follower of haram. She catogerised friends as Siddiqua, Rafeeqa, and Waliyah.

Ms.Ifrasahroshlule, Pune addressed on Role Model Muslim women. She said Maryam (AS) is an example of a pious character (Afeefa) to be followed. Hz.Ayesha Siddiqa (RA) was a scholar, Bibi Asiya a symbol of Strong Faith.

Ayesha and Farha of Muslim Girls Association Hyderabad presented a Conversation on Use of Social Media platforms – facebook, Twitter, Instagram and Whatsapp. They explained for viewers how it is important to verify messages before forwarding and utilizing social media in upgrading skills & talents. They emphasised on focusing on the Real Target of Life to work as Khaire Ummah.

In her opening address,  Asma Zehra, Chief Organiser highlighted the purpose of life, the uniting factor of Religion Islam.

She said “Muslim” means total submission to will of Allah Muslim Girls, Daughters, Bintul Muslim must realise how important is their identity. She said Prophet Ibrahim (As) preached truth to his father when he was young, the Qur’an mentioned youth who took Refuge in a cave in Surah Kahf. Awareness of Religion & Teachings must begin at a young age. Muslim daughters must be proud & confident as they have the best Religion, Principles of life, Code of Dress & they haveimportant role &responsibility in family & society. She expressed faith that these young girls will set standards, in Iman, Taqwa, Ikhlaas, Sabr and Sacrifice. She appealed to them to gear up for future challenges as a Muslim & as a human being on this earth. Muslims are facing issues of Citizenship & their Identity. The struggle for Survival & Existence requires capability, efficiency & skills. Humanity is facing challenges of Health, Safety, Environment, Nano technology, Artificial Intelligence is the next or TOMORROW. Muslim daughters must develop Vision & Plan to give solution to Humanity in future.

Workshop had Question & Answers on Zoom & Youtube & Girls were actively asking questions and clearing doubts. Qir’at, Hamd, Naat, Poems, Taranas in the different sessions engaged the viewers. Program was viewed in multiples of 50, 100 and 500 audience in different places.