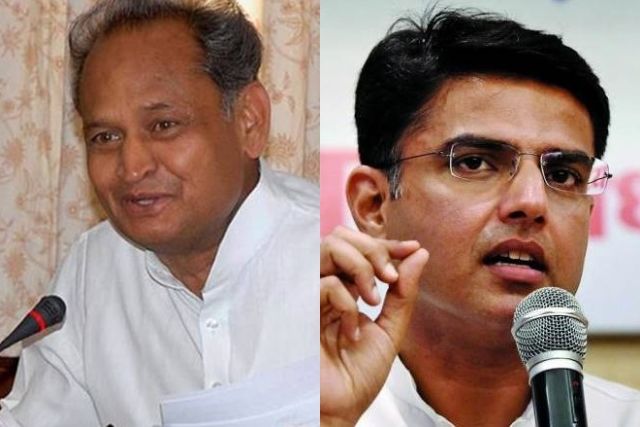 Jaipur : “Kaun Banega Mukhyamantri” was being widely asked after the Rajasthan assembly elections were announced last week given the close fight between Ashok Gehlot, a two-time Chief Minister and Sachin Pilot, the state Congress president and former union minister. It’s a question that’s been around since 1952, when the party marked its first victory in the assembly elections. In all these years, there’s been just one exception.

In 1952, during the elections, the Congress seemed divided into two – one led by Jainarayan Vyas and the other by Tikaram Paliwal.

However, Vyas lost the election by two votes and Paliwal got the nod. However, Vyas won a by-poll from Kishangarh within a year and was made the Chief Minister.

Upset at this, Paliwal briefly resigned from the Cabinet for a short period but then returned as the Deputy Chief Minister.

The protests against Vyas continued and this culminated in internal elections – itself a rarity in the Congress – being conducted in 1954.

Vyas lost by a mere eight votes and another Congress leader, Mohanlal Sukhadia, was named the Chief Minister. He was just 38 years old and went on to intermittently rule the state for 17 years.

However, after the 1967 elections, there was dissidence in the Congress about Sukhadia again becoming the Chief Minister – with no rival as such in the fray. The uncertainty led to a brief spell of president’s rule from March 13 to April 26. Finally, Sukhadia was back in the saddle on April 26, 1967 and continued till July 9, 1971.

In between, tensions had developed with then Prime Minister Indira Gandhi, who had backed central minister V.V. Giri in the 1969 presidential elections while Sukhadia threw his weight behind Neelam Sanjeeva Raddy, who was propped up by a rival faction of the Congress. Giri won but Gandhi was not one to forget.

Thus, after the 1971 elections, Sukhadia faced a tough contest from Barkatullah Khan, who was considered close to Gandhi’s late husband Feroz Gandhi, and had her backing.

Then, after Khan’s sudden demise in 1973, between Congress leaders Harideo Joshi and Ram Niwas Mirdha. Joshi emerged the winner in a fully charged-up environment.

After being out of power for a while, the Congress stormed back in 1998 and was again witness to a close fight between two Congress leaders – Parasram Maderana and Ashok Gehlot. While Maderana, who was a Jat leader happened was Leader of Opposition in the outgoing assembly, Gehlot was the state Congress president, who enjoyed the trust of the Congress High Command. Gehlot got the nod to be Chief Minister, leaving the Jat community fuming. Eventually, the party had to pay a big price as it lost the next elections.

In the run-up to the 2008 elections, it was a close tussle between Congress veteran C.P. Joshi and Gehlot. Joshi, being state Congress president, was a strong contender for the post but lost theelections by one vote. Gehlot got the nod and again became the Chief Minister.

With no let-up in the tradition, history was repeated in 2018 with Pilot and Gehlot pitched against each other. The issue was resolved on Monday with Gehlot and Pilot being sworn-in as Chief Minister and Deputy Chief Minister at the same ceremony – the first time this has happened.

On the flip side, this makes it clear that the history of face-offs between senior leaders will continue in the near future with power being divided in two parts.

(Archana Sharma can be contacted at archana.s@ians.in)