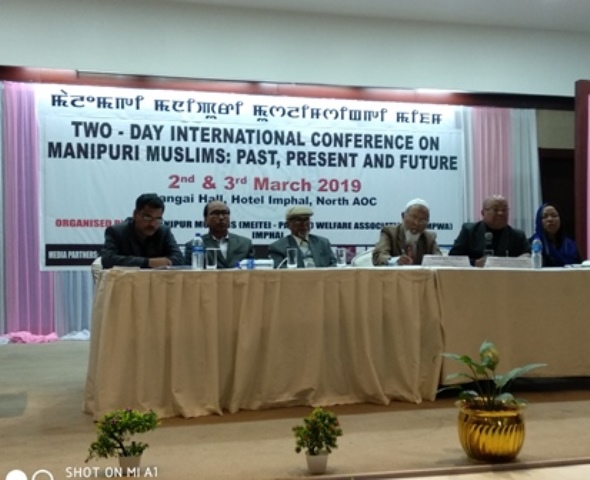 The conference is the first of its kind and around 300 delegates of Meitei Pangal community from Bangladesh, London, Assam, Tripura and Manipur, were participated in it. The delegates from Myanmar could not join the conference but they sent their message of their interest of organizing such valuable get-together.

A large number of research papers were presented during technical session which included women empowerment in conflict situation (Musammat Badrunnesha), Manipuri Muslims and their cultural events (MA Rahman), A study of Manipuri Muslim Society in Assam with reference to the evolving conditions of its cultural, educational and economic aspects(Dr Abdul Khair Chowdhury),

Narrative art of Manipuri Muslim Community(M.M.Ahmed), Socio-economic and lifestyle changes among Meitei-Pangal(Manipuri Muslims) women in Manipur (A.S.Bgogendro), Meitei Pangals in Tripura (Ismail Miya), Literary movement of Manipuri Muslims ( S.M. Seikh), Muslims in the history of Manipur: Their advent, settlement and contribution (Dr Syed Ahmed), Elementary Education of Muslims in Manipur: understanding ground realities (Feroja Syed), History of Manipuri Muslims with reference to the contribution in arts and crafts (M.S.Wakil Shah), Ethnobotanical Study of Muslim (Pangal/Meitei Pangal) Community in Manipur- Part 1 (Mohd Mustaque Ahmed), Socio-economic and educational study of Manipuri Muslims in Tripura (Salahur Rahman), Preaching of early Islam in East Asia Manipur, China and Taiwan by Abbu Wakkas Malik (Wakpalik) and Saad Ibn Waqqas ( Sadik Para Koireng) in early Seventh Century (Dr Farooque Ahmed), Manipuri Muslims: Their history and contributions (Dr Badruddin), Socio-economic survey of Keirak village: A report (Dr Maqbul Ali) and Khuntakpa and Pangals in Manipur (Korimayum Miraj Shah). The titular king of Manipur stated that ‘the contributions of Meitei Pangal (Muslims) be it in war, skills of different fields, paddy transplantation etc from time anon cannot be forgotten. The community is very much part and parcel of Manipur nation. He has emotional attachment towards the persons of Meitei Pangal who is now residents of different countries or other states of India. They left Manipur due to frequent wars at different occasions in the past. The real history of this community should be introduced in the school syllabus/curriculum to spread the awareness to present generation”.

Prof. N.Joykumar Singh stated that “we need a comprehensive history. The people of Meitei-Pangal Community are the sons of the soil and their records are found in the Royal Chronicle”. Shri Deleep Singh (vice chancellor, DM University) talked about the introspection of sense of living togetherness and importance of education in communal harmony. Participating in the panel discussion, the delegates considering backwardness of this community strongly suggested to include Meitei Pangal people in the list of Scheduled tribes. At the end of the session the panel propounded resolutions and recommendations which will be forwarded to the government for the policy making.

By concluding the conference, Mr Khan, IAS, Retd. (functional president) expressed his wish to build a statue of Mohd Shani (the leader of the war against King Khagemba, 16th Century) and the commemoration be done every year. Mohd Shani and his companions were allowed to settle in Manipur. The recommendation reaffirmed that Meitei Pangal (Muslim) communities in Manipur are indigenous inhabitants of Manipur. With the supplication led by Qari Abdul Zalil (London), the conference was closed.