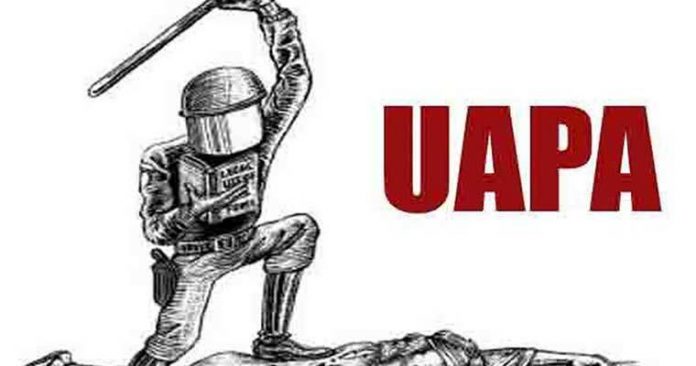 “People crushed by laws, have no hopes but from power. If the laws are their enemies, they will be enemies to the law; and those who have much to hope and nothing to lose will always be dangerous .” -Edmund Burke

Overview of the Act and the Amendment

On July 8, 2019, the Unlawful Activities (Prevention) Amendment Bill, 2019 (in short, ‘the Amendment’) was introduced in the Lok Sabha the Minister of Home Affairs, Mr. Amit Shah proposes, inter alia, a special procedure to deal with terrorist activities. Amidst much resistance from the opposition and heated debates, this controversial bill got the assent of both the lower and the upper houses of the Parliament.

Further, as per section 15 of UAPA, the term ‘terrorist act’ which refers to an act or intent to threaten or likely to threaten the unity, integrity, security, economic security or sovereignty of India or to strike terror on people in India and abroad. This inturn is punishable with  a death sentence or life imprisonment if the act has resulted in human loss.

The reason why the Amendment has led to serious concerns being raised by various sections of the society is because it gives the governmental authorities, specifically the Home Ministry, the power to declare certain organisations as ‘unlawful associations’ or ‘terrorist organisations’. Even being a member of such organisation is a criminal offence but the definition of membership conspicuously absent, allowing investigating authorities to use even the flimsiest of excuse to book people as member of these terrorist organizations.

Adding further to the concerns is the fact that provisions of UAPA are stricter than the domestic criminal law. Under UAPA, the police are allowed a time period of 180 days for investigation as opposed to 60 to 90 days under criminal law. It allows the police to detain an accused for six months at a stretch without producing any evidence against the accused. It also allows the accused to be remanded to police custody for 30 days which is double the amount under criminal law. Thus, under the garb of curbing terrorist activities, this law legalizes unlawful detention at the whims of the government.

To make things worse, the Amendment extends to powers of the investigation agencies to cconduct searches, seizures and arrests based solely on ‘personal knowledge’ of the police officers with prior approval of only Director General of Police. This implies that no written validation from a superior judicial authority is required, thus removing proceedings under the UAPA out of the supervision of Judiciary, the watchdog and protector of the rights of people.

History of the Act

The sixteenth amendment to the Constitution paved the way for the enactment of the UAPA. Though the UAPA Bill was tabled twice in Parliament, during the third Lok Sabha and then again during the fourth Lok Sabha, in both cases it was withdrawn because of the opposition it faced. Finally, it was passed by the fifth Lok Sabha in 1967. The UAPA Bill sought to empower the central executive to ban organizations, a right which until then had been the prerogative of the provinces under the Criminal Law Amendment Act of 1908.

The centre did enjoy powers under the Constitution to restrict freedom of association, but as MP Dayabhai V. Patel pointed out during a debate in Lok Sabha on 11 August 1967, by declaring as ‘unlawful’ a range of activities ‘which encourage or aid persons in unlawful activities or who undertake unlawful activities habitually’ extraordinary powers were being acquired by the executive. He also referred to Article 13 (2) of the Constitution, which debars Parliament from enacting any such legislations which takes or abridges the rights conferred by Part III of the Constitution, i.e. the Fundamental Rights.

The Act was amended in 2004 and 2008 introduced provisions from TADA and POTA, both being laws that had led to severe rights violation.

The Act vis-à-vis the International Standards of Human Rights

Inter alia, the Bill proposes that the central government may designate an individual as terrorist if such person commits or participates in acts of terrorism, prepares for terrorism, promotes terrorism, or is otherwise involved in terrorism. While introducing the Bill, Mr. Amit Shah stated that the amendment will ‘align the domestic law with the international obligations as mandated in several conventions and Security Council resolutions.’

It is ironic that the government is relying on international law for passing this amendment when the entire law is ignorant of international discourse on human rights. Time and again, UAPA, India’s principal counter-terrorism law has been abused by recurring governments to target human rights defenders working with the poor and marginalized communities and those who criticise government inactions or excesses.

Firstly, the definition of a ‘terrorist act’ in the UAPA exceedingly differs from the definition promoted by the United Nations Special Rapporteur on the Protection of Human Rights and Fundamental Freedoms while Countering Terrorism.  In 2006, the Special Rapporteur had said that to call an offense a ‘terrorist act’, three elements must be cumulatively present: the means used must be deadly; the intent behind the act must be to cause fear among population or to compel a government or international organization to do or refrain from doing something; and the aim must be to further an ideological goal.

The UAPA, on the other hand, offers an overbroad and ambiguous definition of a ‘terrorist act’ which includes the death of, or injuries to any person, damage to any property, an attempt to over awe any public functionary by means of criminal force and any act to compel the government or any person to do or abstain from doing any act etc.  It goes even further and includes any act that is ‘likely to threaten’ or ‘likely to strike terror in people’, giving unbridled power to the government to brand any ordinary citizen or activist a terrorist without the actual commission of these acts.

Moreover, the International Convention on Civil and Political Rights (ICCPR), to which India is a party stipulates that presumption of innocence is a universal human rights principle. In contradiction to this, the UAPA reverses the burden of proof if the government proves recovery of arms or fingerprints of the accused on materials associated with a terrorist act. This is not only inconsistent with the fundamental norm but also impels the deliberate planting of evidence. The ICCPR also sets out other fair trial safeguards which are applicable at all times and the UAPA stands in blatant violation of these.

The Convention allows pre-trial detention to be used as a last resort and only when it is necessary, reasonable and proportionate to the objective sought by the prosecution. Instead, under UAPA, the police is allowed a time of 180 days for investigating a case as opposed to the usual 60 to 90 days under criminal law.  This further allows the police to detain an accused for 6 months at a stretch without producing any evidence against the accused justifying such custody.  It also allows the accused to be held in police custody for 30 days instead of 15 days.

Furthermore, the Act also interferes with the privacy and liberty of individuals contravening the provisions of ICCPR which protects against arbitrary or unlawful interference with a person’s privacy and home. The Act allows for searches, seizures and arrests based on the ‘personal knowledge’ of the police officers without a written validation from a superior judicial authority.

UAPA, Dissent and Democracy : Instances of attemps to muffle voices of dissent

Maoist leader Kobad Ghandy was booked under the UAPA in 2009 for being a member of banned outfit and furthering its activities. He was acquitted of charges under Section 20 and 38 of UAPA, but convicted for cheating, forgery and impersonation under provisions of the IPC in June 2016. Out on bail in 2017, he was re-arrested in days after his release by Jharkhand Police.

In the last two years, environmental activists like Thirumurugan Gandhi too have been implicated under the same law. Gandhi, who was arrested in August 2018, was an active participant in a campaign against the eight-lane Chennai-Salem green corridor project and the police firing on the anti-sterlite protestors in the Thoothukudi protests against the Sterlite Copper plant.

In late August 2018, five Indian civil rights activists were arrested under the UAPA for activities connected to a Dalit rally called the Bhima Koregaon in Maharashtra and the subsequent clashes between Hindu nationalists and the Dalit crowd. Although at the time police blamed the violence on the rowdy Hindutva supporters, as the central government became more involved in the case, blame was shifted onto the Dalit activists and supporters who were organising the event.

In justifying the arrests of the five civil rights activists under the draconian UAPA, the government declared these men and women to be ‘urban naxals’ arguing that their support for and work toward greater access to government was fundamentally destabilising to the state. In short, the government has argued that though dissent against the state is hallmark of democratic government, irresponsible or unruly dissent, especially coming from marginal spaces in the state (both geographically and with regard to power) threatens the coherence of the Indian nation and must be policed.

Actions like the arrest of the five civil rights activists in the summer of 2018 are made possible in India by a series of ‘public order acts’, including acts like the UAPA, the Armed Forces (Special Powers) Act, the Prevention of Terrorism Act, and Terrorist and Disruptive Activities (Prevention) Act, which are premised on the state’s need to ‘keep the public order.’ Each of these ‘acts’ allow the government or its representatives broadly defined power to police populations which in some way threaten or are perceived to threaten the state. According to the National Crime Records Bureau, between 2014 and 2016, over 75% of cases under the UAPA ended in either acquittal or discharge .

The fundamental freedoms guaranteed by the Constitution of India including that of association, assembly and expression, are essential for the maintenance of a functioning democracy. The most important facets of freedom of expression is the freedom of dissent and freedom to publically criticize government actions. These freedoms enable people to collectively express, promote, pursue and defend common political interests. They give common people not only the right to express themselves through demonstrations and protests, but also allow for public mobilizations of opinion, irrespective of whether these opinions are critical of the government or the executive.

However, these lofty ideals of the Constitution have been systematically pruned to suit the interests of the ruling class, and there is no better example of this than the Unlawful Activities (Prevention) Act, which place severe strictures on citizens’ rights to practice fundamental freedoms and the 2019 Amendment places even more unbridled power in the hands of the government at the cost of the rights of citizens.

Tamanna Pankaj is a human right lawyer and social activist.