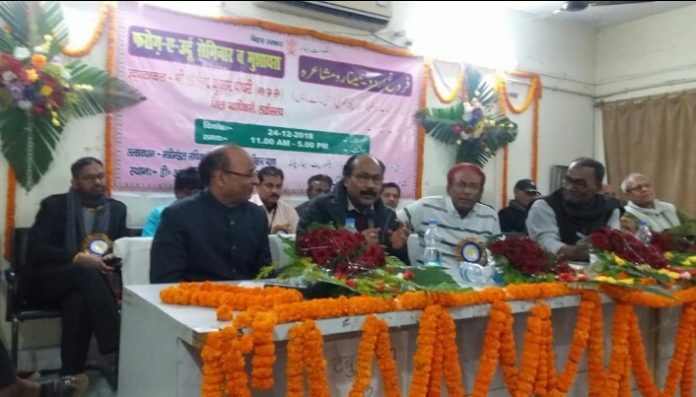 I vividly remember , I was a school boy and the then Bihar Congress chief Minister, Dr Jagannath Mishra had passed or declared Urdu as second official language in some districts of then undivided Bihar, it had created a huge political storm in Bihar. So called Hindi lovers and Urdu haters had raised the sky against that government decision. These Urdu baiters had turned the whole Bihar into a battle ground against Urdu. Even some congress leaders, wearing the khaki nickers under their dhotis were on the fore front of Urdu Virodhi Movement. It was perhaps due to , the strong backing of the then Prime Minister Mrs Indra Gandhi, that Dr Jagannath Mishra stood his ground and remained unflinching, and as a stinging rebuff from Hindi Premis earned the title of Maulana Jangam Nath Mishra.And during this regime of Maulana Jagannath Mishra, many Urdu medium schools were recognized as minority schools. And many Urdu knowing Muslims got jobs as Urdu typists and Urdu translators. When he had successfully but partially implemented Urdu as a second official language, may be because of the fear of losing Urdu Virodhi voters, or because of any other reason

Dr Jagannath lost his position.Today that benevolent of Urdu language is sitting in the unsolicited benches of BJP. Isn’t it strange? Isn’t it a defeat and humiliation of secular, harmonious, and peace loving lobby of Bihar?

Next came the emergence of Mr Laloo Prasad Yadav as the strongest and most articulate exponent of secular polity of Bihar. He became the centre of anti-Hindutva politics and the undisputed leader of ‘MY’ social combination.! A very strange phenomenon came to my observation that during the reign of this champion of secularism and the only ‘leader’ and the ‘‘spokesperson‘of the Muslim community, Urdu took a reverse course. School books stopped being printed and published in Urdu and Urdu schools were forced to turn into Hindi Medium Schools. Number of Urdu newspapers started dwindling. No new Urdu medium schools were allowed to come into offing. And the chief Minister never delivered a speech in Urdu although it was still second official language of the state. 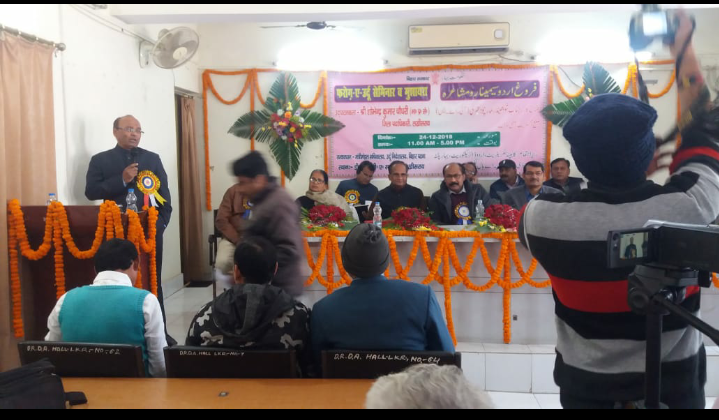 Last week I came across some pleasant breezing in case of Urdu. I was invited to attend a Seminar titled “Farogh e Urdu “followed by a Mushairas ( a gathering of poets for rendering their discourse’) organized by the district treasury officer of Lakhii Sarai, Mr Zakir Hussain. Seminar had not attracted some known scholars of Urdu but it consisted of at least such people who had the understanding of the hardships faced by Urdu and its learners. They seemed to have a good grasp on the issue and how to advance and promote the cause of Urdu by making it a medium of instruction or at least making it a compulsory subject in schools. S. M. Tayyab Asghar who emerged as the most effective and forceful votary for the use of Urdu in different walk of life was conducting the Seminar.

Both Seminar and Mushairas were held in the district collectorate premises. Although Lakhisarai is a small and remote district of Bihar and with a small population of Urdu speakers, the program had attracted  a good number of  audience,  apart from speakers and poets, both locals and outsiders, from Muslims and Hindus community.- The hall was full from dusk till dawn. At the end of the Mushaira, the poets and speakers were presented with a wooden cream colour shall and a closed envelope containing perhaps a bank cheque.

Organizing a Urdu Mushaira and a Seminar titled “ Farogh e Urdu”  under the government banner controlled by a rabid anti-Urdu Party like BJP is itself very surprising and pleasant. According to  Mr Zakir Hussain  every district is granted a fund for organising such events. He himself has been instrumental in organising such events in four or five districts during the last few years of Mr Nitish Kumar. Kudos to  Nitish Kumar for doing at least something for Urdu.