Breaking News
Home / Blog / Why organisations like Al-Qaeda and ISIS can never succeed in India?

Why organisations like Al-Qaeda and ISIS can never succeed in India?

Al-Qaeda was successful in attracting hundreds of Muslims from across the globe in the 1990s but failed to attract Indian Muslims. In the 1980s, thousands of Muslims joined Al-Qaeda in Afghanistan in the name of ‘Jihad’ against non-believers, however, Indian Muslims didn’t show any interest in the same. When there was a global call for Caliphate by ISIS, only about 200 out of millions of Indian Muslims responded to its call. However, it was reported that less than 25 of them actually went to Syria to fight, while another group of 25 migrated to Khorasan with the intention to live in an Islamic State and rest were engaged in online activity only. An important question rises as to why there was insignificant response from Indian Muslims for Al-Qaeda or ISIS?

Indian Muslims have always rejected violence in the name of ‘Jihad’ even under a perceived sense of marginalisation from the mainstream of the nation’s political and economic life, which is a direct result of India’s unique history that have fostered an extraordinary pluralistic culture having been enforced by the Indian constitution and secular democracy. The pluralistic culture of India is highlighted by the veneration of graves of Sufi saints like that of Khwaja Moinuddin Chishti and Nizamuddin Aulia. In fact, Sufism imbibed knowledge of Hindu mysticism with some Sufis even seeing similarities between Islamic and Hindu beliefs.

Indian Muslims always believed in democratic state like India rather than theocratic state like Pakistan. The majority of Muslim opine that they want nothing more than the liberty to work out their own destiny within the Indian secular society. Indian Muslims have contended with occasional challenges to the secular order and attempts at communal polarisation and marginalisation of Muslims in some parts of the country by rejecting the idea that in national politics they function as a monolithic community and rejected communal organisations and showed preference for secular parties.

Most of the Muslims have expressed faith in public institutions and refused mass, collective confrontation against the majority community in case of atrocity (if any) which affirms the political maturity of the Muslim community and their deep entrenched nationalistic sentiments. The recent trends as well as the history have showed that extremist groups have failed miserably in provoking Indian Muslims. It is now the responsibility of the majority to appreciate the sentiments and collectively put a unified front to check the growth of extremism/radicalisation. 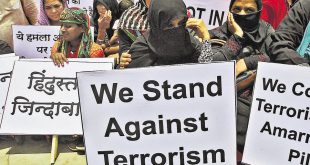 Message of a nationalist Indian Muslim

Madrassa: An option for getting some basic education only

Dreams for development and advancement perpetually bloom in all kids born with resources at disposal. …