Breaking News
Home / Muslim Mirror / Will Muslims ever unite on anything?

Will Muslims ever unite on anything? 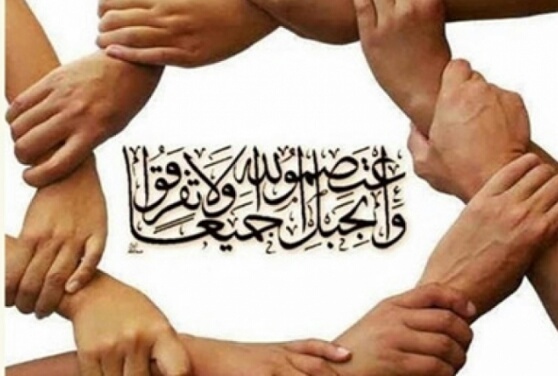 The verses from the Quran are very clear on the subject of unity “And hold fast, all together, by the rope which Allah (stretches out for you) and be not divided among yourselves, and remember with gratitude Allah’s favor on you; for you were enemies and He joined your hearts in love, so that by His grace you became brethren, and you were on the brink of the pit of fire and He saved you from it. Thus, does Allah make his signs clear to you: that you may be guided” (Quran, 3:103).

It further explains that “The believers are nothing else than brothers (in Islam). So make reconciliation between your brothers, and fear Allah, that you may receive mercy.”(Quran, 49:10)

The Quran admonishes the believer to avoid those who cause disunity, “VERILY, as for those who have broken the unity of their faith and have become sects – thou has nothing to do with them. Behold, their case rests with God: and in time He will make them understand what they were doing. (49:10)

It also describes the dividers as psychopaths who rejoice the divisions, “[or] among those who have broken the unity of their faith and have become sects, each group delighting in but what they themselves hold [by way of tenets]. (30:32)

In several of his sayings, the Prophet Muhammad urged the community to work for unity. He said in his last sermon: “Arabs have no superiority over non-Arabs and Non-Arabs have no Superiority over Arabs, You are all equal except by piety and good actions. I leave behind me two things, the Quran and my example, the Sunnah and if you follow these you will never go astray” He also reminded the believers that “The similitude of believers in regard to mutual love, affection, and fellow-feeling is that of one body; when any limb of it aches, the whole body aches, because of sleeplessness and fever.” He also told the community of believers “The Muslim is a brother of another Muslim, he doesn’t oppress him, neither does he hand him over to the enemy, he doesn’t disappoint him, nor does he humiliate him.”

In summary, this Quranic verse summarizes the essence of the message: “And pay heed unto God and His Apostle, and do not [allow yourselves to] be at variance with one another, lest you lose heart and your moral strength desert you. And be patient in adversity: for, verily, God is with those who are patient in adversity. 8:46)

Despite the clear message about the adverse consequences of the lack of unity, the community, by and large, throughout its history has neglected it. Rather, it has indulged itself in almost every kind of division one can think of.
Often, it is argued that once Muslims agree on a single theology, such as praying in one format, fasting through a unified method, moon sighting through consensus, etc., the community become united. These issues are exclusively Muslim related issues. A unified community on these issues is irrelevant to the world that comprises some 77 percent non-Muslims. They can create a superficial unity without bringing about any meaningful changes. Unfortunately, the community leadership has been focussing on this type of unity, while neglecting the divine mandate on the purpose of unity.

The Quran identifies justice as the main purpose of unity among believers. It says in the following verses. “O YOU who have attained to faith! Be ever steadfast in upholding equity, bearing witness to the truth for the sake of God, even though it is against your own selves or your parents and kinsfolk. Whether the person concerned is rich or poor, God’s claim takes precedence over [the claims of] either of them. Do not, then, follow your own desires, lest you swerve from justice: for if you distort [the truth], behold, God, is indeed aware of all that you do!” (4:135)

In another verse, it admonishes 5:8 O YOU who have attained to faith! Be ever steadfast in your devotion to God, bearing witness to the truth in all equity; and never let the hatred of anyone lead you into the sin of deviating from justice. Be just: this is closest to being God-conscious. And remain conscious of God. Verily, God is aware of all that you do. 5:8)

The Quran asserts that those who stand for justice are loved by the creator (5:42). It also elaborates that the purpose of the divine guidance to humanity was to ensure that people commit them to justice. Indeed, [even aforetime] did We send forth Our apostles with all evidence of [this] truth; and through them. We bestowed revelation from on high, and [thus gave you] a balance [wherewith to weigh right and wrong], so that men might behave with equity; and We bestowed [upon you] from on high [the ability to make use of] iron, in which there is awesome power as well as [a source of] benefits for man: and [all this was given to you] so that God might mark out those who would stand up for him and His Apostle, even though He [Himself] is beyond the reach of human perception. Verily, God is powerful, almighty! (57:25)

Justice is not a narrow term. It includes everything that creates a balance in every aspect of life, economics, social relations, personal attitude and behavior, political authority, use of the material and human resources and war and peace. Justice is a universal value and it simply means that when the dignity and rights of one are violated, those who believe in the divine guidance and accept all the creations as His, have to stand for the protection of that individual and group.

It is this lack of commitment to justice that has caused perpetual disunity among Muslims.

Muslim scholars have talked about justice, but in a manner where they do not question the status quo that denies justice to all. Recently a Muslim scholar explaining the meaning of political obedience observed “We do not accept any rebellion (khurūj) against our leaders or our public affairs even if they are oppressive. This is the ʿaqīdah of the Muslims .”(Shaikh Hamza Yusuf) He is not the only one who believes in this idea. There are many others among the classical Muslim scholars who promoted and propagated the idea. But this idea goes against the fundamentals of the divine message that exhorts believers to take a firm and clear position on issues pertaining to justice. In other words, whenever one notices injustice against an individual or a group, it becomes collective and individual responsibility of people to be a witness to justice.
The unity is not for political domination or suppression of the rights of others. The unity is not for establishing the supremacy of Islam or Muslims upon others. Unity is not for only serving Muslim interests. The unity among the believers is to pioneer climate of mutual respect and commitment to justice.
Muslim unity would emerge only when justice for all becomes the motto of our actions and scholarship. Otherwise, we can never create unity on peripheral issues.