Since last seventy years, conflict ridden Kashmir has got engulfed in an armed conflict which has resulted in large scale killings, rapes, disappearances, custodial killings, torture and other human rights violations. Since generation after generation, hitherto, has been witness to many rights violations, it has made the local populace vulnerable to many psychological problems.

Although conflict played a central role in it but there are social reasons also that have aggravated  the problem like peer pressure, family conflict, relationship discords, poverty, etc.

Many  NGOs  have interfered  tried to de-escalate the alarming situation however, with the political situation simmering as ever the situation on ground has hardly improved. To some extent, these NGOs have had good results in terms of getting some people out of this mental health illness but the prolonged political instability and the societal disintegration it brings along  has ensured “unresolved grief” remains there .

The biggest hurdle in the journey to fight this grave problem has been the stigma associated with the mental illness, not astonishingly, leading many patients not to come out openly about their psychological distress.

The reason is that the society didn’t see this illness as it was to be seen, rather it was seen and projected as uglier and strange with the result stigma got, naturally, associated with it. Patients were never responsible to have this stigma born out of this illness. The whole responsibility lies with the society which didn’t give people, with this illness, space to share their stories of miseries and didn’t help them, in any way, to come out of this illness. 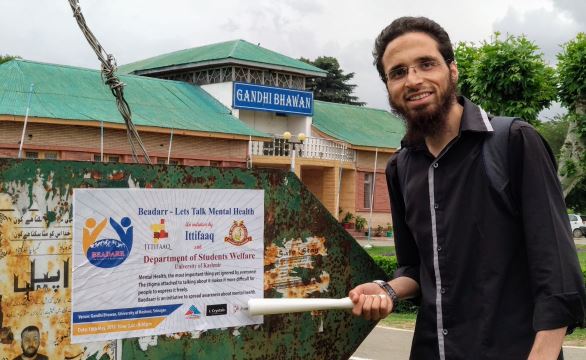 Therefore, it was hard for someone to share her/his story of fear, anxiety, depression or any other psychological disorder so as to not get the tag of being mentally ill. The result of not sharing those stories was seen in the form of suicides (mostly among the young lot), rising suicidal tendencies, isolation / solitary confinement, relationship discords, family conflict etc. Here we would say the trend of not opening up or sharing the story resulted in with serious repercussions. To sum up this, there were two issues in the hand. Firstly the people who would develop some issues related to mental health were not coming forward for treatment, secondly there was societal unacceptance and thirdly there was no such awareness that would have carved a way forward to develop a mechanism to deal with this illness, a prevalent phenomenon in the state of Jammu and Kashmir.

Not seeking help for treatment or coming forward for sharing the stories, created a lot of problems as well as barriers for the individual and collective development in the society. Then Ms. Nida Rehman, the founder of ITTIFAAQ – a not-for-profit organization based in Jammu and Kashmir, used to get the messages from strangers as well as known people for starting any campaign for mental health awareness. The context of messages would come in the form of burn-outs or revelation about facing any mental health problem. “At first, Ms. Rehman says, I thought people are trying to start a conversation with me but it wasn’t so as I would get these messages every day from both known as well as strangers. And then after going through some testimonies of some people, I thought there is no harm to give it a try. Therefore, in the month of April, 2018, I updated certain posts related to it on social media with hash-tag “#let’s talk mental health”. Asking about the response of people towards it, “Initially people here in Kashmir thought that I was saying that all the people of Kashmir are mad, to be on sarcastic mode, as they didn’t understand it first. Then I along with other team members organized an event on let’s talk mental health at Café 99 in order to see how people respond to it. Then in no time, we received good response of our posts insisting us to start an organized full-fledged campaign on this issue, Ms. Rehman happily answers. Talking more about the campaign, Ms. Nowsheen Altaf, member of ITTIFAAQ, says, “Our campaign was not about sharing the stories only but it was also to make people introspect themselves at their own places so as to know if they are suffering from these issues.” Further on asking about the success of the campaign, “We didn’t know it will take a big leap keeping in consideration the societal unacceptance and indifferent attitude towards it, but it was taken aptly and beyond our thinking and the result was, people became vocal about it.” Ms. Altaf answers.

Ms. Rehman says that after constant campaigning on social media and some little events, people would message and call me. People, on coming forward through this campaign, used to ask about suggesting any psychologist, psychiatrist, counselor or any social worker so that they will avail treatment. Furthermore she says that ITTIFAAQ, in taking lead to draw more awareness among people, organized another event in Gandhi Bhawan, Kashmir University, Srinagar on May 16, 2018 wherein young professionals from various fields were invited. In this program the professionals shared their experiences of diagnosing and reacting to the mental health issues in society. The professionals also talked upon the ways and means to bring about a positive change in the society so that there will be no fear at all in seeking treatment and sharing any story related to mental health illness.

To give a message to the people, Ms. Zoya Mir, a Psychologist by profession and member of ITTIFAAQ, says, “Beadarr – an initiative to highlight the importance of mental health and to break the stigmas associated with it. To make people accept the problems associated, an awareness needs to be created and that is what we are catering through Beadarr. It is time to not only talk mental health but also to talk and act on mental health.”

The organizers of this mental health campaign say, the campaign is still going on and will continue till there is a discernible change in the society.

Share
Previous Imagine what might happen if Hindus’ hatred turned into flames” : Giriraj threat to Muslims
Next Erdogan named world’s most influential Muslim